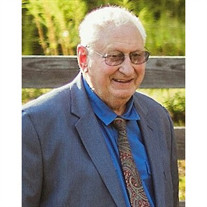 Jerry Nellson Douglass, age 79, of Buford, GA passed away on Monday, April 9, 2018. He was preceded in death by his wife of thirty-eight years, Gail C. Douglass; parents, William and Nell Douglass; and brother, Bill Douglass. Mr. Douglass is survived by his two daughters, Sherri and Michael Wright, Lawrenceville, GA, and Donna and Andrew Wolf, California; four grandchildren, Jeffrey and Shelby Wright, Garrett Wright, Grayson Wright, and Jackson Wright. Jerry absolutely loved the beach and was counting down the days to his next Florida trip. Whether it was taking his grandchildren to climb lighthouses or just sitting by the water, he took trips every year. If he wasn't telling a story about his beach trips, he was talking about his friends at the Hyundai Dealership or HHGregg, that, or the good looking gals on Fox News... But what he talked about most was his family and friends and how proud he was of them. He'll be missed. A graveside service will be held on Friday, April 13, 2018 at 1:00 p.m. at Arlington Memorial Park, 201 Mt. Vernon Hwy NW, Sandy Springs, GA 30328 with Phil Gambil officiating. The family will receive friends on Thursday, April 12, 2018 from 6:00 p.m. to 8:00 p.m. at Flanigan funeral Home in Buford.

The family of Jerry Nellson Douglass created this Life Tributes page to make it easy to share your memories.

Jerry Nellson Douglass, age 79, of Buford, GA passed away on...