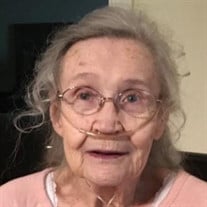 With deep sadness, the children of Mrs. Joan (Meyer) Buehl, age 81, of Flowery Branch, GA. announce her passing on Sunday, December 19, 2021 surrounded by the family, after a long and courageous battle with lung disease. Mrs. Buehl was a 23 year resident of the Lawrenceville, GA and Flowery Branch, Ga. areas. She was a former longtime resident of Gautier, MS. and Pascagoula, MS. She was born on July 8, 1940 in Milwaukee, WI. Joan was the eldest child of the late Harold Arthur Meyer and Cecilia Elizabeth (Krzewina) Meyer. Joan was raised in the Catholic faith. She graduated from Waukesha High School in 1958. She married Mr. Michael Lee Buehl on June 25, 1960 in St Leonard Catholic Church in Muskego, WI. and together they had six children. Joan and Mike relocated their family to Pascagoula, MS in 1973, moving to the Hickory Hills area of Gautier in May of 1974. Joan was a 1st class Machinist at Ingalls Shipbuilding for Dept. 24 and she also worked in Label Plates/Electrical Dept. 35. She retired from Ingalls in 1996. She was a member of Machinist Local 1133 in Pascagoula, MS. Joan was devoted to her family. She had a very kind heart and was know for helping others. Many of her children's friends stayed with the family during their hard times and grew up calling her Mom. She loved to cook and bake. Up until her illness prevented it, her family eagerly awaited their Christmas cookie tins each year. She loved Elvis Presley, Garth Brooks and country music. You would often see her doing the 2-step in her kitchen while cooking. Blessed with a green thumb, Joan grew beautiful roses in her back yard and house plants. She was an avid reader. She enjoyed watching movies and T.V. Series. Some of her favorites were White Collar, 24 and House. She enjoyed family get-togethers and staying in touch with her family members and friends. Joan was a strong woman and this is what her children will remember her for. After the tragic death of her son Steven in 1979, she gathered her strength and carried on for her family. After Mike's passing at Christmas time in 1982, she became a single mother. Again, she gathered her strength and carried on for her family. In early 1983 she lost her father, again her strength carried the family through. After they're family home was destroyed by fire, she pulled her family up and made them a new home filled with happiness and love. She was their rock, their comfort, their source of strength, their confedont, and so much more. She was the heart of their family. Joan truly loved and is truly loved by her family. Her presence will be greatly missed and her absence will be forever felt. In addition to her parents, Harold and Cecelia, she was preceded in death by her husband Michael Lee Buehl, her son, Steven Aaron Buehl, a brother, Arthur “Art” Meyer, a sister and brother in law, Ruth and Woodrow “Buddy” Steiner. Left to cherish her memories are her five children and their spouses; Troy A.Buehl of Grand Bay, AL, Colin M. Buehl of Lawrenceville, GA, Cheryl A and Keith D. Holley of Flowery Branch, GA, Phillip A. and Amber D. Buehl of Pascagoula, MS and Leslie A. and Donald E. Price, Jr of Pascagoula; her brother and sister-in-law, Clarence and Candy Meyer of Pensacola, FL; grandchildren, Charlia Jo (Cliff) Edwards, Michael P. (Ruth) Buehl, Stephanie M. (Billy) Jones, M. Seth Price, Erin L. (Jesse) Mullins, Joshua C. Price, Joan E. Holley, Cheryl Ann Price, Candra M. (Chris) McCune, Cheyenne N. Buehl; Great-grandchildren; Matthew, Carlia, Aubriee, Chase, Spencer and Camron; many nieces, nephews, other relatives and friends. Funeral Services will be held Tuesday, December 28, 2021 at 12:00 pm at the Pascagoula River Audubon Center, 5107 Arthur St, Moss Point. Visitation one hour prior to service. Interment will conclude at Machpelah Cemetery in Pascagoula. O’Bryant-O’Keefe Funeral Home in charge of arrangement, www.obryantokeefe.com

With deep sadness, the children of Mrs. Joan (Meyer) Buehl, age 81, of Flowery Branch, GA. announce her passing on Sunday, December 19, 2021 surrounded by the family, after a long and courageous battle with lung disease. Mrs. Buehl was a 23... View Obituary & Service Information

The family of Joan Buehl created this Life Tributes page to make it easy to share your memories.