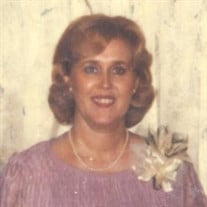 Joann Brackett Marsingill, age 77, of Buford, GA passed away on Friday, March 19, 2021. She was preceded in death by her son, Jeff Marsingill, grandson, Josh Harter, and her parents, Grover and Dorothy Dean Brackett. Mrs. Marsingill is survived by her husband of fifty-nine years, David K. Marsingill of Buford; children, Rhonda and Jim Harter, and Gerry Marsingill, all of Buford; three grandchildren, Jensen Marsingill, Hannge Marsingill, Taylor Harter; great grandchild, Anna Leah Harter; sisters, Lillian Johnson of Buford, and Betty Jean Reid of Bethlehem, GA; brothers and sisters-in-law, Kenneth and Carol Brackett, and Jerry and Judy Brackett, all of Buford; and several nieces, nephews, and cousins. Mrs. Marsingill was born on July 22, 1943 in Buford, GA. She was a 1961 graduate of North Gwinnett High School in Suwanee, GA. Mrs. Marsingill was a homemaker and she was a member of Buford Church of God. Funeral services will be held on Monday, March 22, 2021 at 2:00 p.m. in the Chapel of Flanigan Funeral Home with Rev. Jerry Brackett and Pastor Joey Grizzle officiating. Interment will follow at Broadlawn Memorial Gardens in Buford. The family will receive friends at the funeral home on Sunday, March 21 from 11:00 a.m. until 6:00 p.m. and again on Monday from 12:00 noon until time for the service at 2:00 p.m.

The family of Joann Brackett Marsingill created this Life Tributes page to make it easy to share your memories.