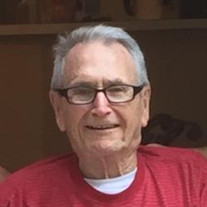 Joe Brown Rogers of Suwanee, GA passed away on July 26, 2020. Mr. Rogers was born on July 23, 1930 in Gilmer County, GA to Robert Lee Rogers and Lear Jane Chapman Rogers. He was predeceased by his beloved wife of 61 years, Geraldine “Jerri” Hollis Rogers, and is survived by his children, Lee Hollis Rogers and his wife,Jackie (Richmond Hill, GA), Beth Rogers Stewart and her husband Rick (Suwanee, GA), Michele Rogers Wonsey and her fiancé, Tom Schofield (Suwanee, GA), and foster daughter Betty Ann Davis (Union City, GA), his grandchildren, Renee Linderman, William Stewart, Brianna Stewart, Robert Wonsey, Paige Ferguson, and Aaryn Rogers, and his great grandchildren, Kristyn Ferguson, Wesley Troy Ferguson, Abigail Linderman, Kathryn Linderman, and Ryleigh Stewart. Mr. Rogers earned a law degree from John Marshall Law School in Atlanta, GA. He spent his entire professional career in the transportation industry, working many years in Atlanta, Georgia, and ending his career in Tallahassee, Florida, as a Vice President of McKenzie Tank Lines. Mr. Rogers was a man who lived his life with honor and dignity, and he had a natural disposition for good humor. He was a committed Christian whose actions demonstrated his kindness and compassion for others. He was a long-time member of Sugar Hill United Methodist Church, and was a practicing Freemason as a young adult. If anyone would like to make a gift in honor of Mr. Rogers, the family would appreciate donations to the March of Dimes as this organization played a life-changing role in Mr. Rogers’ life when he was a child.

The family of Joe Brown Rogers created this Life Tributes page to make it easy to share your memories.