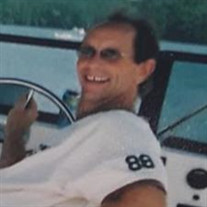 John Wyndell Hughes, Jr., age 63, passed into glory at home on Wednesday, January 6, 2021. John was born in Duluth, Georgia, at Joan Glancey Memorial Hospital on April 2, 1957, to his father, John Wyndell Hughes, Sr., and his mother, Kathryn Powell Hughes. John is preceded in death by his father, John Sr., and his son, Jonathan Zachary Hughes. He is survived by his wife, Donna Hughes, his beloved mother, Kathryn, his daughter, Jordan Leigh Hughes, his granddaughter, Taylor Hughes, his grandson, Jonson Hughes, his sister, Cathy Izarra, his brother-in-law, William E. Izarra, and his nephew, William M. Izarra. John grew up in Harmony Grove United Methodist Church in Lilburn, Georgia, and after moving to Buford as a young adult became an active member of New Prospect United Methodist Church. He loved the Lord and participated with his family in youth group, food bank and other projects as well as attending services and inviting others to his church. He was a 1975 graduate of Berkmar High School as well as Lanier Tech in Gainesville. John enjoyed a variety of jobs in many fields including Burger King, Lerner's, J M Tull Metals, Scientific Atlanta, Bo Peep Signs, Hideaway Bay Marina, Mansfield Industries, and Ace Hardware. However, the joy of his work life and outlet for his entrepreneurial spirit was building and working with family and friends at DJ Auto Glass for many years in Buford. John loved Lake Lanier and greatly enjoyed boating, skiing, hosting guests, cooking, captaining and all activities involved in living lake life to the fullest with his family and friends. He truly was the life of the party. Another of his passions was Harley Davidson motorcycles and driving anything fast and exciting. His skill as a mechanic and ability to tackle any task with enthusiasm and creativity is well known among friends and family. He adored his children and grandchildren; they were the light of his life. A memorial service to celebrate John’s life is planned for the spring (possibly for his birthday in April) when it is safe to gather with friends and family in groups. Anyone wishing to send a gift in memory of John is encouraged to donate to New Prospect United Methodist Church, 2018 Buford Dam Road, Buford, GA 30518.

The family of John Wyndell Hughes created this Life Tributes page to make it easy to share your memories.