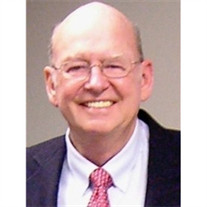 Fitts, Sr., Joseph (Joe) Barry April 9, 1942 - January 6, 2018 Joe Fitts of Hoschton, GA; a treasured Husband, Father, Brother, Uncle, Friend, Mentor, Marine... (the list is long) passed away peacefully on January 6, 2018. Born in Atlanta, Georgia he was the son of Robert Cameron Fitts and Gertrude Shouse and the youngest of 5 children. After graduating from Grady High School, he enlisted in the Marine Corp and completed basic training at Parris Island in South Carolina. After his short stint in the Marine Corp, he married Judith Lynn Coker and they had 4 sons (Barry, Albert, Ben, and Paul) beginning in 1966. He began a career in Real Estate in Greenville, SC and in 1972 an opportunity relocated the family to Atlanta where he enjoyed a long, distinguished and successful career before retiring around 2010. In 1988 Joe married Nancy Tidwell Fitts. Nancy had 3 boys (Steve, Scott, Sid) from a previous marriage and also enjoyed a long and successful career in real estate. In 1997 Joe fell in love with Jesus Christ and devoted his life to Him. He became a member of Perimeter Church and he and Nancy served in many capacities: Greeter, Elder, Stephen's Minister, and Discipleship Leader are just a few of the ways he served. He was always willing to share his testimony, pray for a stranger or do anything that promoted the Kingdom. That was true up until the end when he held the hand of the nurse and prayed for her when she began her shift the day he passed. Always giving! His love of family and especially being a part of his grandchildren's lives kept him on this earth over the last few years. Dad, Pops, Pap, Pappy...He will certainly be missed on this earth but we know in our hearts he is in a much better place today. He is survived by his wife of 30 years Nancy Tidwell Fitts, the seven boys and 12 grandchildren: Joey Fitts (III), Aaron Fitts, Merrill Fitts, Brittany Fitts, Brock Tidwell, Blake Tidwell Van Nice, Grace Fitts, Megan Fitts, Lily Fitts, Luke Fitts, Aubrey Fitts and Will Fitts. A celebration of his life will be held at the Perimeter Church chapel (9500 Medlock Bridge Rd, Johns Creek, GA 30097) on Friday January 12th at 11 am. In lieu of flowers, please donate to Risen Jesus (Online: https://www.risenjesus.com/donate or Offline: Payable to "Risen Jesus, Inc." Send to: 525 Tribble Gap Rd. # 3077, Cumming GA 30028).

The family of Joseph (Joe) Barry Fitts, Sr. created this Life Tributes page to make it easy to share your memories.