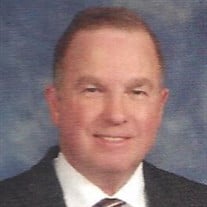 Dr. Joseph Anthony Johnson, age 63, of Buford, GA passed away on Thursday, August 26, 2021. He was preceded in death by his father, J.D. Johnson; and son, Stephen Johnson. Dr. Johnson is survived by his wife of thirty-seven years, Cheyenne Washington Johnson, Buford, GA; daughter, Amanda (Jacob) Bishop, Auburn, GA; three grandchildren, Kallie Johnson, Evan and Ansley Bishop; mother, Helen Crumley Johnson, Hoschton, GA; sister, Sherry Ashmore, Hoschton, GA; and several nieces and nephews. Dr. Johnson was born on November 26, 1957, in Buford, GA. He was a 1974 graduate of Buford High School. He attended Gwinnett Hall Baptist Church as a teenager and young adult where he was ordained as a deacon and started their Awana program. He was an active member of Old Suwanee Baptist Church, Buford, GA, for thirty-six years where he served as Sunday school superintendent, school board member, deacon, and director of children’s church. He was a preacher of the Gospel and Sunday school teacher for over forty years. He served at several churches as interim pastor. He graduated with a Bachelor of Science in Pharmacy from the University of Georgia, a Master of Administration from Brenau College, Master of Divinity from Tennessee Temple University, Specialist in Ministry from Bob Jones University, and Doctor of Philosophy in Religion from Bethany Seminary. As a pharmacist, he worked at several pharmacies including Kmart and Anglin’s Drug, which he bought in 2007 and renamed Johnson’s Hometown Pharmacy. Most recently, he owned Johnson’s River Place Pharmacy in Braselton, Ga. He enjoyed studying the Bible, teaching Sunday School, researching local church history, and spending time with his family. He especially enjoyed playing with his grandchildren. Funeral services will be held on Tuesday, August 31, 2021 at 2 o’clock in the chapel of Flanigan Funeral Home in Buford, GA with Dr. R.C. King and Pastor Tim Campbell officiating. Interment will be at Hamilton Mill Memorial Gardens with Dr. Kenneth Kuykendall officiating. The family will receive friends and relatives at the funeral home on Monday, August 30, 2021 from 4 pm to 8 pm. The service will be live streamed and recorded.

Dr. Joseph Anthony Johnson, age 63, of Buford, GA passed away on Thursday, August 26, 2021. He was preceded in death by his father, J.D. Johnson; and son, Stephen Johnson. Dr. Johnson is survived by his wife of thirty-seven years, Cheyenne Washington... View Obituary & Service Information

The family of Dr. Joseph Anthony Johnson created this Life Tributes page to make it easy to share your memories.