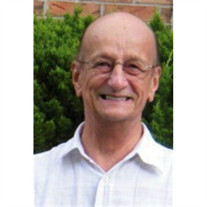 Andre Joseph Leo Morneau of Sherbrooke, Quebec, Canada October 20, 1939 - October 2, 2018 Andre passed away in peace surrounded by his family in his Atlanta, GA home Tuesday October 2, 2018 at the age of 78. Andre achieved many accomplishments in his lifetime starting as a Canadian Air Force Veteran and eventually a successful businessman in Canada and the US. His proudest moments were reflected through his deep love for his wife and four daughters with whom he enjoyed many hours of dancing, rainy pic-nics and laughter. His "joi de vie" was passed on to his girls, 8 grandchildren and 3 great grandchildren. His last moments were shared with his wife of 55 years saying, "We are going to be together forever aren't we?" Andre was preceded in death by his beloved son, Martin, father Joseph Leo Horace Morneau, and mother Lucille LaFleur. Survived by his wife Saundra, loving father of Nicole, son in-law James, Chantelle, Suzanne and son in-law Todd, Andrea and son in-law James, Grandfather to Michael, Allison, Justin, Dezso, Renee, Lexie, Andrew, and Rebecca, Great-grandfather to Jack, Jude, and Elliott, brother to Claude and Micheline and further survived by other relations and friends. Bonjour Papa Je Me Souviens

The family of Joseph L. "Andre" Morneau created this Life Tributes page to make it easy to share your memories.