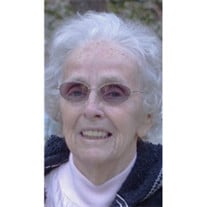 Josephine (Jo) Clifton Young passed away Friday morning January 5, 2018 following a brief illness. Josephine, or Jo to all who knew her, was born February 26, 1928 in Detroit, MI to the late John Arthur Clifton and Josephine Taylor Clifton, along with a twin sister Jacqueline. Her parents returned their family to their native Toronto, Ontario, Canada where Jo would earn her nursing degree from the Wellesley School of Nursing. A lover of adventure, the young nurse would work in British Columbia and Alaska before returning to Ann Arbor, MI where she would meet her late husband Jack Young. They would relocate to Scottsboro, AL as Jack began his career with Hiwassee Land Company and would later be transferred to Etowah. Following retirement, Jack and Jo traveled at every opportunity but their greatest joy was spending time with their family. Jo was preceded in death by her late husband, parents, brothers Frank Clifton and JA Clifton of Ontario and sister Jacqueline Pickering of Cincinnati. She is survived by her daughter Jennifer of Frederick, MD; daughter Heather Clark and her husband Jim Clark of Sugar Hill, GA; granddaughter Casey Clark Gerdes and husband John Gerdes of Aiken, SC and their 4 children Sean, Brianna, Wesley and Caelen; granddaughter Lee Clark of Sugar Hill, GA; and grandson Jack Clark and wife Tori of Belton, TX. The family is planning a private service later this summer in the mountains of East Tennessee which she so loved. In lieu of flowers, the family asks any memorial donations be made to: Josephine Clifton Young Nursing Scholarship Endowment % UT Foundation, Inc. 1525 University Ave. Knoxville, TN 37921-4848

The family of Josephine (Jo) Clifton Young created this Life Tributes page to make it easy to share your memories.