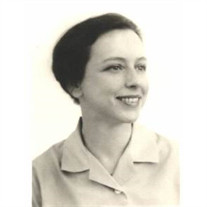 Katharina "Kathe" Galloway, 85, passed away on July 22, 2017. She was born in spring of 1932, in Sopron, Hungary, a small city along the western border with Austria. She was the fourth of six children of Julius and Katharina Feichtinger. Kathe lived the first fourteen years of her life in Hungary where her family operated a sand pit and a delivery service. As part of an ethnic German community tracing their ancestry back several hundred years in Hungary, they kept their German identity through speaking the language at home and attending German schools and churches. When Kathe was six years old, her childhood was overturned by World War II. At the start of the war they lost their father and then experienced food shortages, suspended schooling, and ultimately the bombing of their town. Towards the end of the war, when they could hear the Russian war front advancing on their hometown, they fled by wagon into Austria. They feared Russian retribution, as did many other ethnic Germans who had been streaming through their town day and night from points further east seeking the safety of the American controlled military zones. A month into their flight, the war ended and the family returned to their home in Sopron, but found it already occupied by another family. Kathe's mother had to go to court to force the new occupants to share their own home with them. A year later, Kathe's family was expelled from Hungary by their Russian occupiers under the terms of the Potsdam Conference agreement, which permitted the relocation of ethnic Germans to West Germany or to Siberia. Kathe was tasked with picking up the expulsion notice, which gave them two hours to be at the train station with what they could carry. Her family was quite relieved to see that the train relocating them carried an American flag, which meant they were headed to West Germany. For more on Kathe's story, go to https://sites.google.com/site/kathegallowayfeichtingersstory/ In 1956, Kathe immigrated to America and lived in Trenton, New Jersey, with her sister Mitzi, who had married an American soldier. Four years later in April 1960, at a Sunday morning fellowship meeting in Trenton, Kathe first met her soon-to-be husband Noah, who was being discharged from Fort Dix, a nearby military post. Two months later he proposed, and they were married in November 1960. After living a short while in Kingsport, Tennessee, they moved to Northern Virginia, where Kathe enjoyed cooking and baking for her family, as well as sewing and gardening. For most of her years, she and Noah lived in Sterling, Virginia, where they raised their four children. In 2002, Noah and Kathe moved to Gainesville, Georgia, living there for thirteen years. They lived out their last two years with their daughter and family in Suwanee, Georgia. Kathe is survived by her four children: Eric Galloway of Ohio, Kevin (Lisa) Galloway of Iowa, Karen (Joel) Thain of Georgia, Edwin (Lynnette) Galloway of Iowa, and eight grandchildren: Anja Thain, Thomas Galloway, Calvin Thain, Hannah Galloway, Noah Galloway, Basil Thain, Aaron Galloway, and Adam Galloway. She is survived by two sisters (Mitzi and Resi) and one brother (Feri), but preceded in death by her husband Noah, her parents, and two brothers (Gyula and Imre). A memorial service will be held at Flanigan Funeral Home in Buford, Georgia, on August 6 at 3:30 pm. Visitation is from 2:30 - 3:30 pm. In lieu of flowers, we just want to remember Mom as the wonderful mother she was.

Katharina "Kathe" Galloway, 85, passed away on July 22, 2017. She was born in spring of 1932, in Sopron, Hungary, a small city along the western border with Austria. She was the fourth of six children of Julius and Katharina Feichtinger. Kathe... View Obituary & Service Information

The family of Kathe Galloway created this Life Tributes page to make it easy to share your memories.