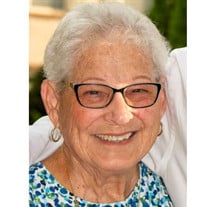 Heaven gained the most beautiful angel this past Monday January 24, 2022, Kathleen C. Lumpkin at the age of 81, passed away peacefully, holding her daughter Rebekah&#8217;s hand. Kathleen was a loving wife of 57 years to her husband Robert E.... View Obituary & Service Information

The family of Kathleen Cassidy Lumpkin created this Life Tributes page to make it easy to share your memories.

Heaven gained the most beautiful angel this past Monday January...