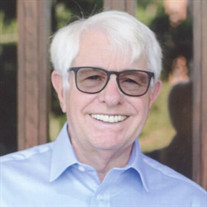 Larry Bennett Spencer, 78 years old of Buford, Georgia, passed away on Saturday, May 1, 2021 at Northside Gwinnett Medical Center after a year-long battle with Crohn’s disease. (He was a former Griffin resident.) Larry was born on July 17, 1942 in Chattanooga, Tennessee. His parents, Robert A and Mary Elizabeth Woodard Spencer, preceded him in death. Larry grew up in Griffin and graduated from Griffin High School in 1960. He went on to graduate from Georgia Military College and then earned his Bachelor’s Degree in Architecture at Georgia Tech in 1967. Larry had his own architectural practice for over 40 years in the Atlanta area, Larry B. Spencer, Architect, P.C. Larry is survived by the love of his life, his wife of 48 years, Dolores Lopez Spencer. His is also survived by his children: son, Stephen Robert Spencer, Rockledge, Florida; daughter and son-in-law, Meredith Spencer and Steve Reninger, Rockledge, Florida; son, Donald Christian Spencer, Chicago, Illinois. He is survived by four grandchildren: Alex, Sam and Kate Spencer, and Stephen Day all of Rockledge, Florida. Larry is also survived by his sister, Julia Spencer Sailors (James), Griffin, GA; brother-in-law, Daniel Lopez (Rebecca), Buford, GA; and sister-in-law, Monique Lopez, Pensacola, Florida. Also surviving are several nieces, nephews and cousins. Larry was of the Methodist faith, and he loved collecting model trains, stamps and boating. Growing up he loved roller skating and tennis. Larry was a very loving husband, father, grandfather, and brother and he will be greatly missed. A Celebration of Life will be held on Saturday, July 17, 2021at 6:00 p.m. at the Pavillion on the Lake at Sterling on the Lake, Flowery Branch, GA 30542. Invitations will be mailed. Please join the family in honoring the life of Larry Bennett Spencer by visiting www.flaniganfuneralhome.com to post your tributes and memories.

Larry Bennett Spencer, 78 years old of Buford, Georgia, passed away on Saturday, May 1, 2021 at Northside Gwinnett Medical Center after a year-long battle with Crohn&#8217;s disease. (He was a former Griffin resident.) Larry was born on July... View Obituary & Service Information

The family of Larry Bennett Spencer created this Life Tributes page to make it easy to share your memories.