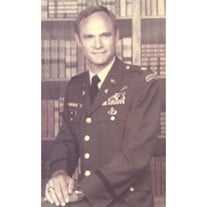 Lieutenant Colonel Marion Edmond "Ed" Mann, Jr., age 79, of Suwanee, GA passed away Monday, May 1, 2017. He is survived by his wife of fifty-seven years, Allena Cobb Mann, Suwanee, GA; children, Diana and Marc Wilson, Sugar Hill, GA, Deborah and Michael Whitfield, Statesboro, GA, Denise and Ladd Bancroft, Sugar Hill, GA; six grandchildren, Josh Whitfield, Dana Whitfield, Ashley Anderson, Seth Bancroft, Jordyn Wilson and Peyton Wilson; great grandchildren, Harper and Emery Whitfield; sister-in-law, Marian Barden, Hampton, GA; and several nieces, nephews and cousins. Lieutenant Colonel Mann was born September 3, 1937 in Atlanta, GA. He was a 1955 graduate of Brown High School in Atlanta, and a 1959 graduate of North Georgia University with a Master's Degree. He was a retired Lieutenant Colonel from the U. S. Army having served twenty two years, and his assignment before retiring was at the Pentagon. He served two tours in Vietnam. He was a member of Sugar Hill United Methodist Church and was a member of the Keenagers Senior Group. Funeral services will be held on Monday, May 8, 2017 at 11:00 a.m. in the Chapel of Flanigan Funeral Home with Pastor Jeff Coleman officiating. Interment will be at GA National Cemetery in Canton, GA on Monday, May 8, 2017 at 2:00 p.m. with full Military Honors. The family will receive friends on Monday, May 8, 2017 from 10:00 a.m. until time of service at 11:00 a.m. at the funeral home. In lieu of flowers, memorials may be made to the Lupus Foundation of America or Sugar Hill United Methodist Church in memory of Ed Mann.

The family of Lieutenant Colonel Marion Edmond "Ed" Mann, Jr. created this Life Tributes page to make it easy to share your memories.