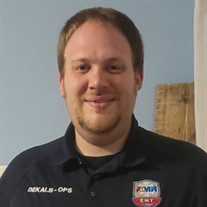 Logan James Wade, age 32, of Monroe, GA passed away on Saturday, September 4, 2021. He was born in Lawrenceville, GA on May 20, 1989 to Judy and Gentry Wade. He grew in health and stature at his family home, in mercy and grace at Harmony Baptist Church…his time through Harmony Baptist Church and preschool at SHUMC, Harmony Elementary, Lanier Middle, original location, Mill Creek High School, being among the first full 4-years class of 2008. He professed his faith Christ as a young boy and baptized by Pastor Landy McDaniel at Rest Haven Baptist Church. On his first day of first grade, he was thrilled to take his first school bus ride in such a large vehicle! He took pride in serving as Bus Safety Monitor for Mrs. Louise Parker. He was honored to be friends with the custodian and snowball throws at Principal Dr. Stone. As a boy, he enjoyed Karate classes, Boy Scouts and fascinated with the United States Military vehicles and weaponry. Full throttle is a fitting description by his sister, Leslie, describes him. Several family vacations were planned to visit Military and Naval museums to explore the realities of a possible career by serving our great nation. I must mention his common interest in Monster truck rally with his dad. He thought flying jets onto air craft carriers would be fun. When he got old enough, we took him to to the Gainesville airport to experience his first flight in small planes at the Gainesville Airport. He got his first job at Kroger at the age of 15 and moved on to the eire center and oil changes at local Walmart to gain experience with many types of vehicles. Logan was in a Boy Scout Troup, Karate and the Gwinnett County Fire Explorers. He graduated from the Gwinnett County Fire Academy in 2009. Logan was a country boy at heart and enjoyed farming cattle along with trucks and tractors and working with light to heavy equipment. He also enjoye video games and mechanical things as he grew to an adult. For two years following graduation he worked at a number of fire stations including Fire Station #28 with Gwinnett County Fire Department. Following GCFD he worked at North Georgia Medical Response in Gainesville. He began his career at American Medical Response in October of 2014. Logan was presently employed with American Medical Response Team in Dekalb County for the past seven years where he was assigned to the Emergency Medical Management. He was a member of Bethlehem Church, main campus in Winder, GA where he was a part of the Medical Team and Security. He was preceded in death by his grandparents, L.C. and Doris Hamilton Wade, Papa Joe Neal took over after Grandfather Carroll James Hayes passing when Logan was only 6 months old, Uncle JW Montgomery with who he admired as a wounded Veteran of Vietnam. Grandparents-in-law, Kenneth and Rose Mary Douglass, Grandmother-in-law Wynelle Holland. Father-in-law Michael H. Holland, (Brothers-in-law Robert Nicholas Johnson and Ryan Micihael Holland as infants). Uncle-in-law Kenneth V. Douglass. He is survived by his wife, Tiffany H. Wade and young daughters, Paige Michael and Payton Lynn. He is also survived by grandmother Johnnie Mae Hayes; his parents Gentry and Judy Wade; sister, Leslie and Chris Shapiro; Cindy Holland and sister-in-law, Christy Holland and Aunt Mary Beth. Aunts and Uncles; Gail Montgomery, Gloria and Kenneth Waycaster, Grant and Maxine Wade, Kathy Hayes, Wanda and Barry Morgan, Sue Smalley and Lisa Thompson. There are many great aunts and uncles, cousins, co-workers and friends from church and walks of life that were especially loved by Logan. Logan, Tiffany and the girls are active at Bethlehem Church 211 campus. The family enjoyed spending time together, both locally in Atlanta as well as on vacationing around the Sougheast and Northeast. Logan loved working on cars, and lived to help others. He gave his heart in everything he did and never met a stranger and always offered love and kindness to all. Logan was deployed to NY for 30 days form March through most of April 2020. He agreed to go, without thinking twice to help others, knowing he was going to the country’s hot spot for the Covid pandemic. Although our world is a little less bright without him, we know beyond a shadow of a doubt he is in Heaven with his creator. God is saying “Well done good and faithful servant”. Logan we know we all have responsibilities here on earth but we can’t wait to see you again. We love you and hope we do you proud. A Funeral Service will be held on Friday, September 10, 2021 at 12:00 p.m. at BEhtlehem Church, main campus with Pastor Drew Cheyney officiating. Interment will follow at Broadlawn Memorial Gardens in Buford, GA. The family will receive friends at the funeral home on Thursday, September 9, from 2:00 p.m. until 8:00 p.m. The family will also receive friends at the church on September 10 from 10:00 a.m. until time of the Service at 12:00 p.m. The link for the virtual service for Logan will be as follows: https://www.youtube.com/watch?v=mYJRUoyMElg

Logan James Wade, age 32, of Monroe, GA passed away on Saturday, September 4, 2021. He was born in Lawrenceville, GA on May 20, 1989 to Judy and Gentry Wade. He grew in health and stature at his family home, in mercy and grace at Harmony Baptist... View Obituary & Service Information

The family of Logan James Wade created this Life Tributes page to make it easy to share your memories.