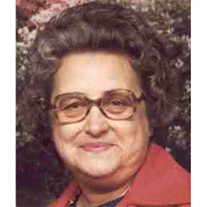 Lonnie Mae Ashworth, age 88, of Suwanee, GA passed away Friday, February 28, 2014. She was a life long resident of the Suwanee area. She was preceded in death by the love of her life, her Husband of 64 years, Willie Lee Ashworth. She also was preceded in death by her parents L.C. and Lilly White, a brother Vick White, and a sister Eva Peeples. "Granny" as she was affectionately known by her family, is survived by Bonnie Ray Ashworth and his wife Connie of Commerce, GA and Danny Lee Ashworth and his wife Janet of Suwanee, GA. Three brothers, Kelly White of Suwanee, GA, Herman White of Maysville, GA and Ralph White of Bethlehem, GA. She also leaves behind two sisters, Sarah Johnson of Suwanee, GA and Margaret and Steve Jackson of Sugar Hill, GA. Two sisters-in-law, Cleo Boles of Barnesville, GA and Hazel White of Winder, GA. She is also survived by five grandchildren, Chris Ashworth of Commerce, GA, Heather Maxwell of Commerce, GA, Amanda Thane of Suwanee, GA, Samantha Raynor of Gainesville, GA and Dan Ashworth of Mt. Pleasant, SC; eight great-grandchildren are also left behind as part of her Godly legacy. Lonnie Mae as most folks called her, was a retired homemaker, who found her greatest joy in serving others. She was a talented lady who did so many things well, yet not for herself, but for those around her who had need. "Granny" was first and foremost a believer in Jesus Christ, and a Baptist by choice. She was a member of Peachtree Road Baptist Church for over seventy years and modeled what a Proverbs 31 lady should look like to all those who knew her. She was Granny not only to her own family, but to those neighbors and friends who were fortunate to know her as well. Undoubtedly, Her legacy as a Godly woman will not be lost on anyone who ever knew her. She will be remembered by all, missed by all and forever cherished by all who were touched by her goodness. Funeral services will be held Sunday, March 2, 2014 at 2:30 p.m. in the Chapel of Flanigan Funeral Home with Rev. Danny Ashworth, Rev. Winfred Martin and Rev. Rolland Jackson officiating. Interment will follow at Peachtree Road Baptist Church cemetery in Suwanee, GA. The family will receive friends at the funeral home Saturday, from 1:00 p.m. until 5:00 p.m. and from 6:00 p.m. until 9:00 p.m.

Lonnie Mae Ashworth, age 88, of Suwanee, GA passed away Friday, February 28, 2014. She was a life long resident of the Suwanee area. She was preceded in death by the love of her life, her Husband of 64 years, Willie Lee Ashworth. She also was... View Obituary & Service Information

The family of Lonnie Mae Ashworth created this Life Tributes page to make it easy to share your memories.