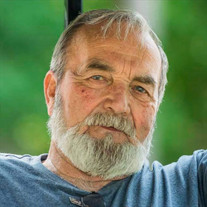 Louis W. McCarley, age 75, of Suwanee, GA, passed away on Saturday, May 7, 2022. He was preceded in death by his parents, Garvin and Madrue McCarley; daughter, Tammy McCarley; son, Gary McCarley and grandson, Slade Petty. Mr. McCarley is survived by his wife of 35 years, Shirley Skelton McCarley; children, Chris (Dana Weaver) Petty of Duluth, Yancey Petty of Suwanee, GA, Michelle Peace of Winder, GA; grandchildren, Brendan Petty, Caleb Petty, Heather McCarley Roberts, Matthew Cheatham, Robert McCarley; several nieces, nephews and cousins. Mr. McCarley was born on July 12, 1946 in Alabama. He owned McCarley Hauling and Grading Company, Suwanee, GA and was a member of Free Chapel in Gainesville, GA. Mr. McCarley was an avid hunter and fisherman and his grandchildren were his pride and joy. A funeral service will be held at 6:00 p.m. on Thursday, May 12, 2022 in the Chapel of Flanigan Funeral Home. The family will receive friends from 4:00 p.m. until 6:00 p.m. on Thursday, May 12, 2022 at Flanigan Funeral Home. In lieu of flowers, donations may be made to the American Heart Association in memory of Louis W. McCarley.

The family of Louis W. McCarley created this Life Tributes page to make it easy to share your memories.