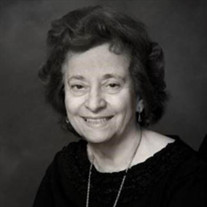 Louise Harootunian, the daughter of the late Krekor and Eva (Haroian) Hightaian was born in Worcester, MA. on November 18, 1930. She attended local schools, graduating from North High School, Worcester, MA in 1949 and from Clark University in 1953 where she attained her A.B. degree in psychology. She was employed as a social worker for the City of Worcester until she married Shant J. Harootunian in December 1953. The Harootunians left for London, England immediately after their honeymoon where ENS Harootunian was on duty with the U. S. Navy Security Group. Mrs. Harootunian's first child, Lu-Anne Mercedes Harootunian, was born in England in 1954. After her husband's release from his active naval service, the Harootunian family relocated to Charlottesville VA where her husband attended law school. During their stay in Charlottesville, Mrs. Harootunian taught elementary school in the Albemarle County school system, thereby enabling her husband to complete his legal education at the University of Virginia. Louise's son, Shant Veeken Harootunian, was born in 1959. After the children had progressed through their primary school grades, Mrs. Harootunian resumed her teaching career in the South Whitehall Township PA school system where she did substitute teaching for several years. The Harootunians relocated to Larchmont, New York in 1969. Mrs. Harootunian enrolled in the College of New Rochelle, receiving the MA degree as a Reading Disabilities Specialist, and then commenced full time teaching in the City of Yonkers, NY school system where she taught at the elementary, middle and senior high school levels until her retirement in 1990. In 1978, they relocated to Washington Township, Bergen County, NJ. Retirement gave Louise the opportunity to resume her long-time interests in gourmet cooking. Louise's cheesecakes and Armenian dishes were constantly praised by all who were fortunate enough to share their hospitality. Her husband paid her the supreme complement when he would repeatedly proclaim, " My wife's the best cook in the world!" The Harootunians moved to Peachtree City GA in 2000 where they enjoyed their retirement years, traveling to visit their grandsons Sean and Matthew Albert and their granddaughters, Chloe and Paige Harootunian in NJ. With the progression of her Alzheimer’s disease, they relocated to a continuous care facility in Gainesville, GA in 2010. Mrs. Harootunian was a former member of the Holy Trinity Armenian Church of Worcester MA, STS. Vartanantz Armenian Church of Ridgefield NJ and the Armenian Apostolic Church of Greater Atlanta. She was a former member of the Bergen County, NJ chapter of the Armenian Relief Society. She was an ardent supporter of the New Neighbors League of Peachtree City and especially enjoyed meeting with the ladies of the International Group. She is survived by her husband of over 67 years, Shant Harootunian of Gainesville GA. her daughter and son-in-law Lu-Anne and Michael Albert of Roswell, GA, her son and daughter-in-law, Shant V. and Jeanne Harootunian of Morristown, NJ, grandchildren, Sean, Matthew, Chloe and Paige, and nephews, LCDR Gregory Hightaian, USN, retired and family of Charleston SC and COL Jeffery Hightaian, USAF, retired, and family of Pike Road AL, and numerous cousins, nephews and nieces. She is predeceased by her parents and her brother Victor Hightaian, Esq. Burial will take place at the Georgia National Cemetery, Canton, GA on January 25th at 11:00 AM

Louise Harootunian, the daughter of the late Krekor and Eva (Haroian) Hightaian was born in Worcester, MA. on November 18, 1930. She attended local schools, graduating from North High School, Worcester, MA in 1949 and from Clark University in... View Obituary & Service Information

The family of Louise Harootunian created this Life Tributes page to make it easy to share your memories.

Louise Harootunian, the daughter of the late Krekor and Eva (Haroian)...