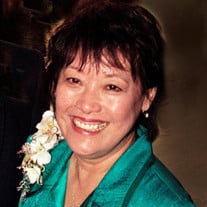 Mabel Shing Lee, 81, Hoschton, GA (December 30, 1938 – July 6, 2020) concluded an 81-year run that graced the stages of her native Miami, FL and included stopovers at Coral Gables High School, Crandon Park Beach, the Burdines Bakery, Miami Lakes FL with the last 13 years in Georgia. May is survived by her on-stage co-star of 60+ years, Richard D. Lee and her stagehand children - son, Kenneth (Rhona) and daughter, Cynthia (Scott, sons Evan and Nathan). Her passion for sewing, baking and cooking were the pillars for fashioning seasonal family dinners that included the fanciful oyster stuffing, pies of all types and of course turkeys that rivaled dinosaurs. No one ever went home hungry and everyone took something home. Knowing how to take care of those she loved stemmed from being the only girl to assist in nurturing, feeding and with a lot of tough love - aiding six brothers to raise their families. May was predeceased by brothers William (Lourdes, son Daniel) and William Wong. Her upbringing skills aided in the growing family brood with brothers David (Diane, daughter Jew-Lee); Stephen (April, Richard, Kimberly, Tami); Raymond (Mary, Brian, Christopher, Kathleen); Wayne (Elaine, Jason, Eric) and another small army of next generation nieces and nephews. May kept the Playbill editors hopping to include the exploits of their cherished show-stopping sidebars. The lights of this eight decade production sparkled the brightest in the final acts as the gleam in May’s eyes shone devotedly on her grandsons Evan and Nathan who called every day and who’d go to the ends of the Earth for their Por-Por (Chinese for grandmother on mother’s side). They are deeply saddened by her final curtain, but enriched by her energy and love. May exited the stage of life with the grace and pride with which she lived it - to the fullest. From San Francisco to Maine – that included her favorites, clams, crabs and lobsters and eventually homeland China where a Peking Duck and all the trimmings would make her smile all the brighter. Her request was cremation with her ashes to be scattered to the world she left behind with resistance, but with the life knowledge and love she helped create and instill.

The family of Mabel Shing Lee created this Life Tributes page to make it easy to share your memories.