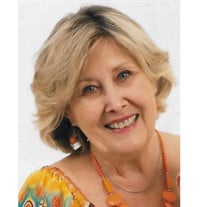 Margaret Sprattler Masak September 29, 1940 - March 13, 2022 Margaret S. Masak of Suwanee, Georgia, passed away on March 13, 2022, at the age of 81. Born on September 29,1940 near Bruchsal, Germany, she was the youngest child of Karl and Lina Sprattler. After emigrating to the United States at the age of 17, she settled in New Jersey where she gained U.S. citizenship and lived happily for many years before relocating to the Atlanta area. Margaret was a fixture of the local artistic community and a longtime patron and member of the Duluth Fine Arts League, County Seat Players, Lionheart Theater, New Dawn Theater and many more. Her creative pursuits included pottery, costume making, stagecraft, knitting and painting. Her works have frequently adorned the halls of public buildings and private galleries throughout Gwinnett County. She continuously served in volunteer roles with many local charitable organizations, was a member of the George Pierce Park Community Fitness Program and was a devout and lifelong member of the Catholic Church. For more than 20 years, Margaret co-managed the Dunwoody, Norcross & Lilburn based Toy Trains ‘N Things retail store along with her spouse and other partners. Margaret was preceded in death by her husband, George Masak and her brother, Oscar Sprattler. She is survived by her son Christopher Masak, daughter-in-law Caroline Masak, grandchildren Griffin and Lincoln, sister Else Kratzmeier, nieces Antje Willy, Petra Hardock, Laura Jones, Michelle Sawyer, nephews Steffen Sprattler and Jimmy Masak, their families and a host of longtime friends. A lover of animals, she is also survived by her dog Bentley. A brief visitation will be held on Thursday, April 7, from 6-8pm, at Flanigan Funeral Home, 4400 S. Lee Street, Buford, GA 30518. The Funeral Mass will be held at 12 :00 Noon on Friday, April 8, at The Catholic Church of St. Monica,1700 Buford Highway, Duluth, GA 30097, with Father Jack Dirkin officiating. A reception will directly follow from 1-3pm. All are welcome. It was Margaret’s wish that any memorial tributes be made in the form of charitable donations to Newborns in Need or The Duluth Fine Arts League. For those unable to attend the funeral mass in person, it is our hope that a livestream or recording will be made available. Details to come.

The family of Margaret Sprattler Masak created this Life Tributes page to make it easy to share your memories.