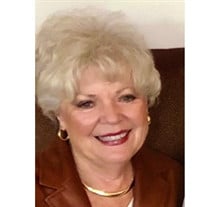 Marilyn Sue King, age 82, of Buford, GA passed away on Wednesday, March 31, 2021. She was preceded in death by her parents, Floyd and Margery Brice King; sister, Barb Cooper; and her children’s father, Cletis Boyer. Mrs. King is survived by her husband of twenty-four years, James “Jay” Martin of Buford; children, Valerie Boyer and Todd Gladden of Buford, Stephanie Boyer and Steve Turnipseed of Cumming, GA, Mickey D. Boyer of Monroe, GA, Colette Boyer and Jeff Parker of Buford; ten grandchildren; nineteen great grandchildren; two great great grandchildren; sister, JoAnn (Bob) Pritchard, Joplin, MO; step grandchildren, Brian and Kimberly Martin of Cumming, GA, and Bruce and Kelly Martin of Sugar Hill, GA; four step grandchildren; and four step great grandchildren; several nieces and nephews; and her Schnauzer, Mori. Mrs. King was born on July 13, 1938 in Webb City, Missouri. She was a 1955 graduate of Webb City High School. She was the retired owner of Maple Lodge Bed and Breakfast in Blowing Rock, North Carolina for many years. Mrs. King was a member of Brookhaven Christian Church in Brookhaven, GA. She loved gardening, baking, and decorating, but most of all she loved being with her family. A Celebration of Life will be held at the home of Colette Parker on Saturday, April 10, 2021 from 2:00 p.m. until 6:00 p.m. In lieu of flowers, donations may be made to the American Cancer or the Salvation Army in memory of Marilyn King.

The family of Marilyn Sue King created this Life Tributes page to make it easy to share your memories.