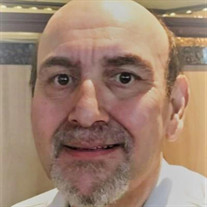 Marios Payiatsos, age 59, resident of Hoschton GA, passed away Saturday December 11,2021 at Northside Hospital Forsyth. Mario is preceded in death by his father, Michael Payiatsos, his mother, Anastasia Rebstock, and sister Georgia Creasy. He is survived by his wife of 34 years, Rebecca Payiatsos, his daughter Mikayla Payiatsos, his brother Rowland Rebstock, and his aunts, uncles, and cousins in Cyprus. He is also survived by his sisters-in-law, Rhonda Bush(Earl) and Stephanie Lunsford(Tim), His brother in law, Gary Calhoun, his mother and father in law Ronald and Jan Calhoun, as well as his nieces and nephews. Marios was born on May 28, 1962 in London to Michael Payiatsos and Anna Rebstock. Marios graduated Sequoyah High School and joined the US Air Force from 1979-1981 where he was honorably discharged. From 1982-2004 Marios owned the fire, wind, and flood restoration company MMR Inc, and worked at Haag Engineering Company until 2013. He married Rebecca Payiatsos in 1987, and welcomed his daughter Mikayla Payiatsos in 2002. Marios was a family man who enjoyed hunting and University of Alabama football. Marios will be remembered for his big heart, kindness, and humor. He impacted many people’s lives and will be greatly missed. A visitation will be held on Friday December 17th at Flanigan Funeral home, 4400 S Lee St, from 6-8pm. A memorial service will be held Saturday December 18th at 11:00am at Buford Church of God, 4800 S Lee St. In lieu of flowers the family would appreciate donations to the American Kidney Foundation in Mario’s name.

The family of Marios Payiatsos created this Life Tributes page to make it easy to share your memories.