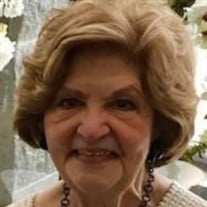 TRIBUTE TO MERITA ANN BUTLER Merita Ann McLain Butler was born on July 7, 1937 in Carbon Hill Alabama to Whit and Genie McLain. She was blessed with a sister, Nell Barlowe and a brother, Kenneth McLain. She was close to her parents and her family was precious to her. As a spunky little girl, she loved to climb trees, play with dolls, and be with her family and friends. She later loved dressing up and wearing make-up. That spunkiness in Merita enabled her to get things done. She was a go getter, which could be aggravating at times, but you knew she had passion to help out a family member. At the age of 12, she went to a church event in Birmingham, AL and met Bobby Butler and he told her she was the prettiest little brown eyed girl he had ever seen. So pretty that he was totally enamored with her, and asked her to marry him! In 1955, Bobby married that pretty little brown eyed gal and they began their adventure together in the Air Force in England. After marriage, she followed Bob to Europe to become an Air Force wife. A year after being married she became a mother, and found her true calling and most loved position in life. Merita loved her family with fervor and grace. No time or hour was ever too late for her to help her family. Her Lord and her family mattered the most in her life. Through the next 10 years, they had Beverly and Jeannine, and served in the military, with Merita always serving her family and standing beside Bob as they both ministered to people in the church and gave to the families in France that lived in the caves. Giving to others was a true love language of Merita. After the military they moved back to the states and had Marisa, where Merita then helped her husband with his building career, and soon became the mom involved at school, church, drill team, and a host of many sleepovers, and school events. Merita and Bob served in the church over the years and as they taught Sunday school; they ministered to others by hosting events in their home. Merita was one of their best cheerleaders and invited everyone she met to attend church. She and Bob were long time attenders of Free Chapel in Gainesville. Merita and Bob’s family kept growing and they were blessed with 5 grandchildren, Cason, Courtney, Lauren, Nicholas, and Emily Grace. She deeply loved her grandchildren with all her heart. And then came the mighty great-grandsons, Collin, William, Jacob, Landon, and a new baby girl, Lillian Rose. Merita was a mighty prayer warrior; she covered each family member daily with the blood of Jesus, and people would call on her to pray for them in their time of need. Her greatest legacy was her love of the Lord and how she shared that love and taught her children to love the Lord. She loved serving her Lord and telling others about the Lord Jesus Christ. We have no doubt she is healed and rejoicing in Heaven and waiting for the day when we can all rejoice together once again! Merita and Bob were big supporters of the “Comfort My People Israel” program that supports victims of the holocaust as they live out their final days in poverty and isolation. Donations will help secure food, housing, and daily visit for these precious survivors. In lieu of flowers, donations can be made at: https://jentezenfranklin.org/promotions/israel-yel.

TRIBUTE TO MERITA ANN BUTLER Merita Ann McLain Butler was born on July 7, 1937 in Carbon Hill Alabama to Whit and Genie McLain. She was blessed with a sister, Nell Barlowe and a brother, Kenneth McLain. She was close to her parents and her family... View Obituary & Service Information

The family of Merita A. McLain Butler created this Life Tributes page to make it easy to share your memories.