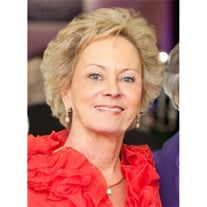 Nancy Smith Chandler, 68, of Suwanee, passed away June 5, 2017 after a brave battle with recent illness. Born on February 16, 1949 in Thomasville, Georgia to Franklin I. and Doris Smith, Nancy was raised on a Georgia Centennial Family Farm in Coolidge. From an early age, Nancy's dynamic personality was evident as she was both a beauty queen and a 4H ribbon winner. After graduating from Thomasville Central High School in 1967, Nancy attended the University of Georgia. She earned a Bachelor of Science in Home Economics in 1970 and a Master of Education in 1971, and was a member of Kappa Alpha Theta sorority. In Athens, she met the love of her life, Richard B. Chandler, Jr. and they were married August 14, 1971. Nancy's career began as a State Staff Specialist with the Georgia Cooperative Extension Service and she went on to be the Director of Consumer Affairs for Colonial Food Stores. Rick and Nancy moved to Buford, Georgia in 1973. Nancy's passions were cooking, entertaining and giving back to the community and people that she loved. In 1985 Gwinnett Magazine named her Caterer of the Year. Nancy was a member of the 1998 Leadership Gwinnett class and recognized for her many years of community service with the 1999 Gwinnett Chamber of Commerce Public Service Award. Her commitment to the community extended to Gwinnett Clean and Beautiful, Gwinnett County Revitalization Task Force and she was a champion of the Hi Hope Service Center Annual Gala. Nancy was a 30 year member of the Stonehedge Garden Club, was a member of the Daughters of the American Revolution and enjoyed her friendships through her Buford Ladies Bridge Club and tennis teams over the years. Rick and Nancy are members of Peachtree Road United Methodist Church in Atlanta and affiliates of First Presbyterian Church in Highlands, North Carolina. She was a wonderful wife, mother, grandmother, loving sister and aunt. Nancy was a friend to everyone and her quick wit, jokes, zeal for life and contagious laughter will be missed tremendously. Nancy is survived by her husband of 45 years, Rick, of Suwanee, Georgia; daughter and son-in-law Elizabeth and James Bilton, grandchildren Caroline Bilton and James Bilton, Jr. of Dallas, Texas; sisters Mary Jo Beverly of Thomasville, Georgia and Becky Enzor (Jim) of Raleigh, North Carolina; nephews, nieces and great nephews. She was preceded in death by her brother Stanley F. Smith and brother-in-law Ken Beverly. A celebration of Nancy's life will be held on Friday, June 9, 2017 at 11:00 a.m. in the Chapel of Flanigan Funeral Home with Rev. Curtis Fussell of First Presbyterian Church of Highlands officiating. The family will receive friends at the funeral home on Thursday, June 8, 2017 from 4:00 p.m. until 7:00 p.m. Nancy's burial will be private. In lieu of flowers, donations in Nancy's memory can be made to Gwinnett Clean and Beautiful, Gwinnett Medical Center Foundation, or the Hi-Hope Service Center. Arrangements by: Junior E. Flanigan of Flanigan Funeral Home and Crematory, Buford, GA, 770-932-1133.

Nancy Smith Chandler, 68, of Suwanee, passed away June 5, 2017 after a brave battle with recent illness. Born on February 16, 1949 in Thomasville, Georgia to Franklin I. and Doris Smith, Nancy was raised on a Georgia Centennial Family Farm in... View Obituary & Service Information

The family of Nancy Chandler created this Life Tributes page to make it easy to share your memories.