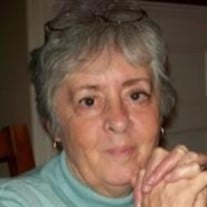 Nancy Joy Vance, 80, is now joyfully reunited with her loving husband, Phil, in the Lord’s kingdom. She is survived by her daughters Jan (Martz), Heidi (Holt), grandchildren Thomas Koshi, Rebecca Koshi, Andrew Holt, and Austin Holt, sister Adrienne (Henry) DeVries, and many nieces and nephews, grandnieces and nephews, and many lifelong and close friends. Nancy was born and raised in Markham, IL on August 16, 1940, where she lived with her mother (Catherine), father (William), and older sister Adrienne. Her life was also filled with many Doran cousins, and a large family garden that included chickens and geese. Her Grandfather Muench owned a bakery in Chicago, which provided many coffee cakes and other recipes over the years. Nancy, as mother to Jan and Heidi, was involved as Brownie troop leader, and neighborhood mom. She supported her daughters in swim team, band, science fair and other activities. Nancy loved to garden and visit family. Many family Christmas’s were spent on the beach in Venice, FL where her parents had retired. Nancy started her career as a teenager, working as a medical transcriptionist. She moved to Taylorville, Illinois, where she began work as a phlebotomist. Later she earned her bachelor’s degree in Medical Technology and became certified with the state as a Medical Technologist, rising to become Director of the laboratory and later all of diagnostic services. On April 23, 1988, she married Philip K. Vance (d) of Salem, IL. They moved to Alton, IL, where she became director of the laboratory at Alton Memorial Hospital. They loved to travel together and explore the world. They were active members of Main Street United Methodist Church. They loved their church family, volunteering on the “Bucket brigade”, supporting Encounter, and other service projects. Phil and Nancy were especially active in supporting the American Cancer Society’s Relay for Life. Her Sunday school group “Genesis” was particularly close, hosting fundraisers, events and supporting each other through life’s ups and downs. It was Phil and Nancy’s joy to be a part of such a close church family. Later, she took a position at Barnes-Jewish/Christian (BJC) Hospital as Director of Diagnostic Services for their 5 hospitals where she retired in 2002. In 2017, Nancy moved to Buford, Georgia, to be nearer her daughter Heidi. Arrangements are pending. The family asks, that instead of flowers, you consider a donation to Main Street United Methodist Church, Alton, IL, or American Cancer Society’s Relay for Life.

The family of Nancy Joy (Campbell) Vance created this Life Tributes page to make it easy to share your memories.

Nancy Joy Vance, 80, is now joyfully reunited with her loving...