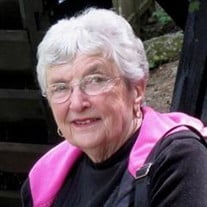 Norma Johnson Woy, age 88, formerly of Oak Ridge, Tennessee, died peacefully on October 9, 2020, at Seasons Hospice after complications from a fall. Norma was the daughter of Loy and Aline Johnson and was born September 2, 1932, in Spartanburg, SC. She was preceded in death by her husband, Edgar A. Woy, daughter, Meg Woy Beers, and brothers Eden Johnson and Yates Johnson. She is survived by her daughter Beth Callahan and son-in-law Jack Callahan of Suwanee, Georgia; granddaughter Quinn Callahan Wicks (husband Bill) currently stationed in Vicenza, Italy; grandson John Callahan (wife Mary) of South Windsor, Connecticut; six great-grandchildren; Tommy, Julie, and Devon Wicks and Margaret, Sean, and Claire Callahan; brother-in-law Russell Woy (wife Janet), sisters-in-law Alice Johnson, Martha Johnson, and Anna Johnson Soderburg as well as many nieces, nephews, and extended family. Norma was a 1954 graduate of Furman University. She met her husband Ed during her senior year, and they married in July 1954. They were stationed for two years at a USAF base near Nagoya, Japan. In 1956, they moved to Oak Ridge, Tennessee where they made their home for the next fifty-two years together. Norma was an elementary school teacher in Oak Ridge City Schools for thirty years and retired in 1994. She loved her career at Linden Elementary School and enjoyed working with the staff and students there. In addition, Norma enjoyed music throughout her life. She played the piano and violin, sang in church choirs, and was a devoted patron of the Oak Ridge Civic Music Association. Norma and Ed were involved in numerous church and Oak Ridge civic activities including Girl Scouts, Girls’ Club, ORCMA, AAUW, Delta Kappa Gamma, Crown Monarch Auxiliary, Oak Ridge Institute for Continued Learning (ORICLE), and the League of Women Voters. Norma was active in all of these organizations and also enjoyed playing bridge with her dear Oak Ridge friends. She and Ed enjoyed many years of domestic and international travel before and during their retirement years as well. Norma moved from Oak Ridge to Georgia in 2018 to live closer to her daughter. The family would like to thank the staff of Wickshire South Lee Assisted Living in Buford, Georgia for their compassion and care over the past two and a half years. Since travel is difficult at this time, a private burial at Honey Creek Woodlands in Conyers, Georgia, will be planned with the family in the future. The family asks that any memorials be made in Norma’s memory to the Oak Ridge Civic Music Association 118 E. Division Road, Oak Ridge, TN 37830 or to the charity of the donor’s choice.

Norma Johnson Woy, age 88, formerly of Oak Ridge, Tennessee, died peacefully on October 9, 2020, at Seasons Hospice after complications from a fall. Norma was the daughter of Loy and Aline Johnson and was born September 2, 1932, in Spartanburg,... View Obituary & Service Information

The family of Norma Johnson Woy created this Life Tributes page to make it easy to share your memories.