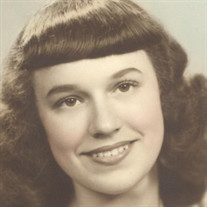 Ona Lee J. Hince, 91, passed away peacefully at home on September 20, 2020 in Suwanee, Georgia after a long struggle with Alzheimer’s. Ona Lee was born on July 25, 1929 and raised on the family farm in Charlotte, NC. She graduated from Paw Creek High School and attended business school in Charlotte. She was married to her loving late husband, Francis "Frank" Anthony Hince, on March 2, 1951 at Saint Patrick’s Catholic Church in Charlotte, NC. Frank and Ona enjoyed a beautiful life together for 63 years. She worked in Telecommunications for several major corporations such as Southern Bell, Eastern Airlines and General Motors. Ona Lee was heavily involved in the Beta Sigma Phi Sorority since 1966. She received many honors and awards during that time including serving as president of her chapter. Ona Lee, the youngest of ten, is preceded in death by her parents, Mr. and Mrs. James Alfred Johnson of Charlotte, NC, her nine brothers and sisters and her husband, Frank. Ona Lee is survived by her son, Francis Anthony Hince, Jr. and wife Ann; son, Timothy Alan Hince and wife, Elizabeth. Ona Lee will be forever remembered by her four grandchildren, Leeanne Hince Shirley and husband Daniel, Craig Daniel Hince, Stephanie Helen Hince Winski and husband Alex; and Madison Elise Hince. Ona Lee will also be fondly remembered by her numerous nieces, nephews and dear friends. Private funeral services for the immediate family will be held on September 23, 2020 at Flanigan Funeral Home, Buford, GA. A graveside service and burial will follow at 2:30 at Arlington Memorial Park in Sandy Springs, GA. Memorial donations in memory of Ona Lee may be made to the Alzheimer’s Association at www.ALZ.org.

Ona Lee J. Hince, 91, passed away peacefully at home on September 20, 2020 in Suwanee, Georgia after a long struggle with Alzheimer&#8217;s. Ona Lee was born on July 25, 1929 and raised on the family farm in Charlotte, NC. She graduated from... View Obituary & Service Information

The family of Ona Lee Johnson Hince created this Life Tributes page to make it easy to share your memories.