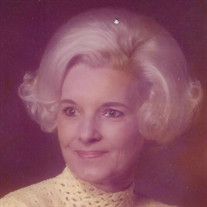 Obituary for Ouida Drew O’Steen Edwards July 31, 1930 – November 7, 2021 Mrs. Charles D. Edwards (Ouida Drew O’Steen) of the Retreat at Buford, Buford, Georgia passed from this world on Sunday, November 7, 2021, to be with her beloved husband Doug. Mrs. Edwards was known by many names but most of all she was Mama, not only to her husband and daughters, but also to many friends and family. Mama was born on July 31, 1930, at home in Mayo, Lafayette County, Florida to Grover Barney and Mildred Janey Land O’Steen. Very much a tomboy in her youth, she was injured playing and ended up spending two years in Hope Haven Hospital in Jacksonville, recovering from Osteomyletis (an infection of the leg bones). This period would help to shape the woman she became, physically strong, mentally tough and to those that knew her a true steel magnolia. She was a graduate of Lafayette County High School. Before marrying on February 4, 1951, she attended secretarial school in Jacksonville, Florida. Following graduation, she spent time working for the Wolfson family business. She met the love of her life in Mayo while on a date with his cousin. Doug always said that it was the poodle skirt, bobby socks and the walk that sold him on Mama as the love of his life. Their lifelong romance included KA fraternity parties at the University of Florida, where the name Mama started even before she was a mother, over 50 years as season ticketholders for UF football, skeet and trap shooting and travel for business with Doug and to see her girls after they married and left home. She was “Mama’s Taxi” long before that term was coined taking her daughters Charlene Elizabeth Edwards Law (Keith) of Pendergrass, Georgia, and Deborah Ann Edwards Kelly (Major Charles E. M. Kelly (USMC ret.)) of Duluth, Georgia to a multitude of activities from Girl Scouting to cheerleading. She was always game to chaperone when needed and always enjoyed the other girls involved in these activities. She was a devoted gardener, but this expanded into rose gardening after her daughters left home. She began a garden of some sixty hybrid-tea roses that she nurtured year-round. Over the years, she won several first-place awards for her roses at the annual Jacksonville Rose Society shows. She was a devoted daughter to her mother and mother-in-law. Always willing to help at any time. Mama was predeceased by her husband Charles D. Edwards “Doug”, her parents and her brother Wyatte O’Steen of Mayo, Florida. She is survived by her sister,

The family of Ouida Drew O’Steen Edwards created this Life Tributes page to make it easy to share your memories.