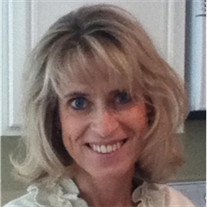 Patti Littell Williamson, age 49, of Sugar Hill, GA passed away on Sunday, March 10, 2013. She is survived by her husband of twenty-two and one half years, John B. Williamson, Sugar Hill, GA; daughter, Ashley Williamson, Sugar Hill, GA; parents, James K. and Patricia Ann Littell, Social Circle, GA; brothers and sister-in-law, Kevin and Pam Littell, Covington, GA and Kenneth Littell, Conyers, GA; father-in-law and mother-in-law, Chuck and Mabel Williamson, Tucker, GA; brother-in-law and sister-in-law, Charles and Anita Williamson, Snellville, GA; sister-in-law and brother-in-law, Lisa and Blake Gilbreath, Grayson, GA; several aunts, uncles, nieces, nephews; one great niece; and cousins. Patti Williamson was born March 3, 1964 in Summerville, NJ. She was a 1982 graduate of Cedar Shoals High School in Athens, GA and a 1988 graduate of the University of Georgia with a Bachelor's Degree. She was a Bank Manager for Georgia Trust Bank in Buford, GA for the past three years. She was a member of North Gwinnett Kiwanis Club, member of the North Gwinnett Rotary Club and a member of the Gwinnett Chamber of Commerce. She was active in Relay for Life in Gwinnett. She was an active member of Shadowbrook Baptist Church in Suwanee, GA. A Celebration of Life Service for Patti Williamson will be held on Friday, March 15, 2013 at 2:00 p.m. at Shadowbrook Baptist Church with Pastor Rev. Bobby Linkous officiating. The family will receive friends at the funeral home on Thursday from 4:00 p.m. until 8:00 p.m. In lieu of flowers, memorial donations may be made to the American Cancer Society, Gwinnett County Unit, 6500 Sugarloaf Parkway, Suite 260, Duluth, GA 30097 in memory of Patti Williamson.

The family of Patti Littell Williamson created this Life Tributes page to make it easy to share your memories.