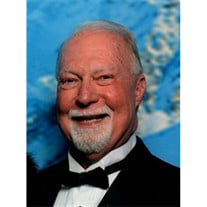 Paul Owen Cherry, age 68, of Suwanee, GA passed away on Sunday, May 28, 2017. He is survived by his wife of thirty-seven years, Shanna Austin Cherry, Suwanee, GA; children, Jessica Lynn Cherry Mills and husband, Ryan Mills, Hoschton, GA and Jason Paul Cherry, Woodstock, GA; granddaughter, Ella Morgan Mills; brother-in-law and sister-in-law, Wayland and Jane Austin, Vidor, TX and sister-in-law and brother-in-law, Sherry and Grady Colvin, Austin, TX; and several nieces, nephews and cousins. Mr. Cherry was born July 25, 1948 in Houston, TX. He was a 1966 graduate of Robert E. Lee High School in Baytown, TX. He was a veteran of the U. S. Army. He was retired from Advantage Industrial Automation as a software trainer. He was a volunteer for Friends of Suwanee. He was a member of Hamilton Mill United Methodist Church, in Dacula, GA, where he was also a member of the Way Sunday School Class and a leader of Life Group. He was a devoted husband and father, and he was widely regarded as, "such a nice guy." He loved traveling, was genuine, loving, had a positive disposition and exuded the "Cherry Charm." Funeral services will be held on Thursday, June 1, 2017 at 1:00 p.m. at Hamilton Mill United Methodist Church, 1450 Pine Road, Dacula, GA 30019 with Pastor Rev. Jason Mincey officiating. The remains will be placed in state at the church at 12:00 noon. Interment will be held on Friday, June 2, 2017 at 12:30 p.m. at Georgia National Cemetery in Canton, GA with military honors. The family will receive friends at the funeral home on Wednesday, May 31, 2017 from 4:00 p.m. until 8:00 p.m. In lieu of flowers, memorial donations may be made to Hamilton Mill United Methodist Church Building Fund in memory of Paul O. Cherry.

The family of Paul Owen Cherry created this Life Tributes page to make it easy to share your memories.