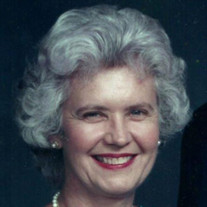 Peggie Morris Stewart Coleman of Lanier Village Estates in Gainesville, GA passed away July 5, 2021 following an extended illness just days after her 93rd birthday. Peggie was born June 19, 1928 in Macon, GA. She moved to Little Five Points in Atlanta as a young child and graduated from Girl’s High in 1945. Peggie was involved in many school activities. She was selected as one of the original members of the Rich’s Teen Board and a Sweetheart of Boy’s High. It was at Georgia Evening College (later to become Georgia State University) where she met her first husband, Donald Bain Stewart. They were married for 50 years and raised their children in Atlanta, GA. Peggie was active as both a Cub Scout Leader and Girl Scout Leader. Before retiring to their home at Lake Lanier, Peggie worked in the family paving business, Stewart Brothers, Inc. for many years. She was an active alumni member of Kappa Theta Sorority which held meetings and trips for more than 60 years after college. As a resident of Flowery Branch and Gainesville, Peggie volunteered for the Red Cross and Lanier Park Hospital. She was a widow member of The Atlanta Athletic Club and a member of Sea Palms Country Club in St. Simons Island. Peggie loved to decorate for every occasion and was a member of several garden clubs. She was an active member of First Presbyterian Church of Gainesville. It was in the church's grief support group, which she joined after Don's death, that she met her second husband, Bob Coleman. They married in Feb. 2000, moved to Lanier Village Estates in 2005 and enjoyed 15 years together. Peggie was preceded in death by her parents Charles A. Morris and Ray Olson Morris, her husbands, Donald B. Stewart and Robert J. Coleman, and her brother Rev. Jack E. Morris and sister Sadie M. Walker. She is survived by her children, Donald B. Stewart, Jr. and wife Leslie Davis Stewart; William M. Stewart and wife, JoAnn Kavanaugh Stewart; and Pamela Stewart Jester and husband John Timothy Jester; Grandchildren, Millie Stewart Sloan (Spencer), Donald B. Stewart,III (Lauren), Katherine Stewart Durré (Jonathan), J.T. Jester, Jr, and Stewart Jester, as well as three great grandchildren. She is also survived by Bob's 6 children and their families of 10 grandchildren and 8 (and growing) great-grandchildren, who she has loved as her own. Many thanks to the wonderful caregivers at Willowbrook, and to so many friends who have consistently visited her during her lengthy illness. A memorial service will be held at a later date.

The family of Peggie Stewart Coleman created this Life Tributes page to make it easy to share your memories.