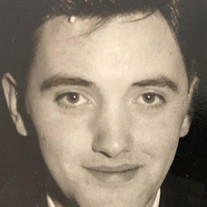 Peter Brennan, 83, of Hoschton, GA, passed away on December 14, 2020 with family by his side. He died after a one-year battle with mesothelioma and two continuous days of watching Hallmark channel Christmas movies, never knowing where one ended and a new one began. He retired to his bedroom Monday evening and while watching Two and a Half Men, peacefully passed away (there is more to that story, but the author of this obit was told it couldn’t be published). He always had a great sense of humor, which was evident until his final breath. Pete was born on April 21, 1937 to Frank and Claire Brennan in Wakefield, England. In the late 1960’s, he moved his wife, Doreen, and three daughters to Washington state to work for Boeing. He lived in the Seattle area until July of 2018, when he moved to Georgia to be closer to his daughters and grandchildren. He was a talented pianist and singer, spending years playing in a nightclub band when he was in England. He was also an avid golfer until the last few years and a great soccer player in his younger days, playing recreationally until he was in his 50’s. Pete was preceded in death by his parents and two wives, Doreen (m. 1959 – 1984) and Ann (m. 1985 – 2018). He is survived by his three daughters, Bev (Joe) Singh, Flowery Branch, GA - Debbie (Steve) Dougan, Flowery Branch, GA - Kate (Rich) Woyce, Suwanee, GA - his grandchildren Alexandra (Chad) Nixon, Buford, GA, Rick Jeffries, Stafford, VA and his two great grandchildren, Parker & Claire Nixon, Buford, GA. He also leaves behind his beloved dog, Kate (the telltale sign of who his favorite daughter was). We will miss you dad, but forever thankful for the amazing memories we will always cherish, like when we were young, and you were trying to show us the “right” way to dive thru a Hula Hoop and ended up in the emergency room with a dislocated shoulder……a classic “dad” moment! We are so grateful for these past 2 1/2 years with you close by again. Love you dad…. thanks for everything. Per his wishes, there will be no formal service, but we will have a celebration of life at a later time. In lieu of flowers, please consider making a donation to your local Humane Society.

Peter Brennan, 83, of Hoschton, GA, passed away on December 14, 2020 with family by his side. He died after a one-year battle with mesothelioma and two continuous days of watching Hallmark channel Christmas movies, never knowing where one ended... View Obituary & Service Information

The family of Peter Brennan created this Life Tributes page to make it easy to share your memories.