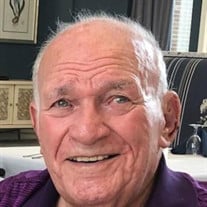 Ramon Bernard Pisonero passed away peacefully surrounded by family on June 02, 2020. He was born August 02, 1928 in upstate New York, and spent part of his childhood in Cuba before his family settled back in New York and Connecticut. He met and married the love of his life, Joyce Combs, in South Florida, in 1950 and after a time living in Texas, He and Joyce, along with their children Sherry and John, settled in Boynton Beach, FL. Ray and Joyce put all their energy into the operation and success of The Blossom Shoppe Florist, their family-owned business, started by Joyce in 1958. Ray joined her a few years later, and they remained active as owner-operators until their retirement in the mid-1980s. Their involvement in the floral industry is legendary in Florida, and if Joyce was the brains of the outfit, Ray was the backbone. From overseeing construction of the building (still standing today) where The Blossom Shoppe operated for almost 40 years (and including the apartment over the shop where they raised their family) to dealing with all the back office and behind-the-scenes support necessary to make The Blossom Shoppe a thriving and important business in Palm Beach County, Ray was admired mostly for being the only man alive that could corral his energetic and single-minded wife. Yet his love for Joyce was obvious; she was the vivacious and outgoing face of the business while Ray preferred to keep a much lower profile. Her love for Ray in return was no less enthusiastic, and they were one of those rare combinations of business and personal partnership where each partner was absolutely complimentary to the other. Their nearly 70 years of marriage attests to the commitment and love they shared. They were equally inseparable outside of the shop, and their hard work in The Blossom Shoppe afforded them many trips throughout the country and overseas. Their friends and acquaintances were numerous, and their appetite for theme parties, square dancing, snow-mobiling, RV-ing and general international social mayhem became the foundation for so many fantastic memories. It is truly a blessing for all who had the privilege of knowing Ray and Joyce. Husband, father, grandfather, great-grandfather, business partner, friend. All these terms describe Ray, but none do justice to the heart and soul that made him so beloved by all. To say he will be missed will be a gross understatement. To try and replace his presence in our family will be impossible. Instead we all will raise a glass often to his memory, his sense of fun and adventure, his amazing creativity and his love and zest for life. Mr. Pisonero is survived by his wife of 69 years, Joyce Pisonero of Suwanee, GA; son and daughter-in-law, John & Lydia Pisonero, Lake Worth, FL; daughter and son-in-law, Sherry and Timothy Mattlin, Buford, GA; grandchildren, Samantha Miller, Chad Ward, Joelle Miller, Olivia Gordon, Carysa Mattlin. Visitation will be at 10:00am on Saturday, June 06, 2020 in the State Room at Flanigan Funeral Home, 4400 South Lee Street, Buford, GA 30518. A brief service in celebration of his life will follow at 11:00am. It goes almost without saying that in lieu of any other gesture, please send flowers!

Ramon Bernard Pisonero passed away peacefully surrounded by family on June 02, 2020. He was born August 02, 1928 in upstate New York, and spent part of his childhood in Cuba before his family settled back in New York and Connecticut. He met... View Obituary & Service Information

The family of Ramon Bernard Pisonero created this Life Tributes page to make it easy to share your memories.