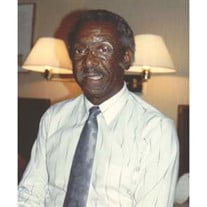 Ret. Sgt. Walter Joseph Richardson, age 81, of Buford, GA and formerly of Gilbert, AZ passed away on Thursday, March 31, 2016. He is survived by his wife of twenty years, Lou Ellen Richardson, Buford, GA; children, Joyce and John Pitts, Buford, GA, Pam Jackson, Dallas, TX and Walter Richardson, Jr., Albany, GA; and five grandchildren. Mr. Richardson was born February 16, 1935 in Farmville, VA. He was a graduate of Prince Edward High School in Farmville, VA and he attended Mesa Community College in Mesa, AZ. He was a retired veteran from the Air Force after twenty-three years of service and he also retired from the City of Phoenix, AZ. He was a mason and a member of the Baptist Faith. Funeral service will be held on Saturday, April 9, 2016 at 1:00 p.m. In the Chapel of Flanigan Funeral Home with Dr. Jim Ferguson officiating and with military honors by the Air Force. The family will receive friends at the funeral home on Saturday, April 9, 2016 from 12:00 noon until time of service. To express condolences, please sign our online guest book at www.flaniganfuneralhome.com. Arrangements by: Junior E. Flanigan, Flanigan Funeral Home and Crematory, Buford, GA (770) 932-1133.

The family of Ret. Sgt. WalterJoseph Richardson created this Life Tributes page to make it easy to share your memories.