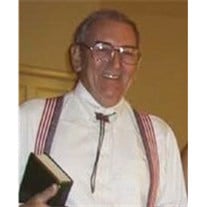 Gerald "Jerry" Wesley Kline Gerald "Jerry" Kline, 76, of Lawrenceville, GA went peacefully to be with his Lord on May 22, 2016. He was born in Washington, D.C. September 13, 1939, and grew up in Kittaning and Tionesta, PA, where he attended... View Obituary & Service Information

The family of Rev. Gerald W. Kline created this Life Tributes page to make it easy to share your memories.