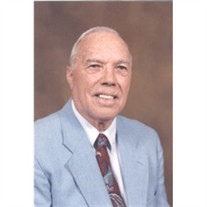 Rev. Charles M. Pirkle, age 85, of Buford, GA passed away on Sunday, March 1, 2020. He is survived by his wife of sixty-six years, Julia Garner Pirkle; his four children, Susan Pirkle Mikan and spouse, Alden Keith Pirkle, Charles Philip Pirkle and Julie Pirkle Van Tassel and spouse; seven grandchildren; and twelve great grandchildren. There are many, many more extended family members and dear friends that we include in this list. Rev. Pirkle was born August 25, 1934 in Norcross, GA. He was ordained as a minister at Mt. Tabor Baptist Church in Duluth, GA. Rev. Pirkle was pastor of five Southern Baptist Churches in his fifty-seven years as an ordained minister including Sharon Baptist Church, Suwanee, GA, Teamon Baptist Church, Griffin, GA, Sugar Hill Baptist Church, Sugar Hill, GA, and Airline Baptist Church, Gainesville, GA where he was Pastor Emeritus upon his first retirement. Afterwards, he was called by Friendship Baptist Church in Buford, GA where he was a member and his final retirement was December of 2018. His love for the Lord has brought over one thousand lost souls to Jesus and twelve men were ordained into the ministry as well as many ordained in other positions of ministry under Rev. Charles' leadership. Funeral service will be held on Wednesday, March 4, 2020 at 3:00 p.m. in the Chapel of Flanigan Funeral Home. A private interment will be at Broadlawn Memorial Gardens in Buford, GA. The family will receive friends at the funeral home on Tuesday, March 3rd from 2:00 p.m. until 4:00 p.m. and from 6:00 p.m. until 8:30 p.m. The family requested that anyone desiring to bring food to deliver it to Flanigan Funeral Home reception room. Flowers accepted or memorial donations may be made to Friendship Community Baptist Church, 3784 Friendship Circle, Buford, GA 30519 or to Airline Baptist Church, 3368 White Sulphur Road, Gainesville, GA 30501 in memory of Rev. Charles M. Pirkle.

The family of Rev. Charles M. Pirkle created this Life Tributes page to make it easy to share your memories.