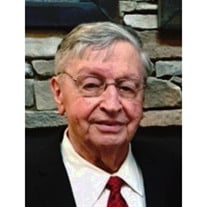 Rev. Edgar Frank Williams, Jr., age 84, of Buford, GA passed away on Thursday, January 14, 2016. He was preceded in death by his wife, Helen Deaton Williams, his mother, Alma Whiting Williams, Father, Edgar Frank Williams, Sr., stepmother, Mary Skelton Williams, brothers, Charles Williams, Billy Williams and Donald Williams. He is survived by his children, Joan Williams and David (Brenda) Williams; grandchildren, Christy (Kevin) Ferguson, Jesse Burson, Nathan Williams, Tatum Williams; great-granddaughter, Maddox Ferguson; brother, Jimmy (Barbara) Williams; sisters in-law, Lurene Williams, Hazel Deaton Williams, Bernice Deaton Weaver, Edith (Dan) Morton; several nieces, nephews and cousins. Edgar married Helen Deaton of Buford on December 23, 1950. They were blessed with 2 children: Mary Joan and David Edgar, both of Buford. After graduating from Flowery Branch High School in 1948, Edgar began working at Bona Allen Tannery in Buford. Later, he prepared to enter the ministry and graduated from Truett-McConnell College and the University of Georgia. While attending school, he pastored these local Southern Baptist churches: Union Baptist (Braselton), Union Grove(Auburn), and Statham. Moving the family to Louisville, KY, Edgar graduated from Southern Baptist Seminary in 1964. Returning to Georgia, he served as pastor of Zion Baptist (Covington). In 1968, Edgar transitioned to being a bi-vocational pastor while employed as a social worker at the Youth Development Center and later the Central State Hospital in Milledgeville where he retired. While employed, he was pastor over a 35 year span at these churches: Smyrna (Deepstep), Mitchell (Gibson), Devereaux, and Friendship(Milledgeville). In addition, Edgar was active in many organizations for he loved serving others and making a difference. He was a member of the Georgia Baptist Executive Committee for 2 terms, clerk of the Washington Baptist Association for 25 years, and twice President of the Milledgeville Kiwanis Club where he enjoyed 43 years of perfect attendance. For hobbies, he enjoyed woodworking and gardening working alongside Helen in these projects. His children and grandchildren will forever remember him for instilling a strong work ethic, loving God and helping others, and encouraging them to set short and long range goals. He always told each one they had leadership abilities and to use them. Edgar loved his family, loved to laugh, and enjoyed playing practical jokes on his family and friends. He will be sorely missed by all of us. Funeral service will be held on Sunday, January 17, 2016 at 2:30 p.m. at Zion Hill Baptist Church with remains placed In State at 1:30 with Pastor Danny Newbern officiating. Interment will be at Zion Hill Baptist Church Cemetery Buford, GA. The family will receive friends Saturday, January 16, 2016 from 4:00 p.m. until 8:00 p.m. at the funeral home. In lieu of flowers memorials may be made to Zion Hill Baptist Church Building Fund in memory of Rev. Edgar Williams, Jr. To express condolences, please sign our online guest book at www.flaniganfuneralhome.com. Arrangements by: Junior E. Flanigan, Flanigan Funeral Home and Crematory, Buford, GA (770) 932-1133.

The family of Rev. Edgar Williams, Jr. created this Life Tributes page to make it easy to share your memories.