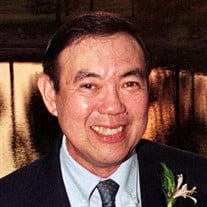 RICHARD DARRELL LEE (14 June 1934 - 8 December 2020) He passed away this morning at 7:25 am ET in a hospital in Atlanta, GA following a two-week bout with COVID-19. The Portland, OR native was predeceased by his wife of over 60 years, Mable Shing Lee of Miami Florida and survived by his son, Kenneth (Rhona Wise), daughter, Cynthia Lee (sons Evan Christie and Nathan Christie) and sister Lora Wong (Kimberly and Stacy). A Traffic Engineer/Analyst with Miami-Dade County for over 40 years, Richard enjoyed woodworking, puzzles and good food. He also administered youth sports with the neighborhood Optimist Club – serving as umpire, organizer and team photo photographer. Moving to Miami in the 1950s after an U.S. Air Force stint and frigid assignment in Greenland, Richard met and married Mabel before settling down in the suburban outpost – Miami Lakes as one of the first families to occupy the farm-rich cow pastures on the northwest boundaries of Miami’s civilization. With a mish-mash of cooking uncles (related and otherwise!), Richard’s family ran a North Miami Beach Chinese restaurant (Lime House). It was from this rich culinary opportunity, the family gained a cultured taste for well-prepared food. Foodies – way before it was stylish! (That includes the Shark Fin and Bird Nest soups, along with the 100-Year Eggs that were the lead in to the much more desired bounty of seafood delicacies). At some point, Richard got involved with the University of Miami – compiling football and basketball statistics – which in turn opened another opportunity with the American Football League’s expansion Miami Dolphins. From watching Danny Thomas race down the sideline, stride for stride with Joe Auer’s franchise-opening kickoff return for a touchdown to two Super Bowl runs – including a 17-0 perfect season, Dan Marino’s Hall of Fame passing exploits and nine Super Bowls (II, III, V, X, XIII, XXIII, XXIX, XXXIII, XLI) - oh, let’s not forget the four University of Hurricanes NCAA National Titles (1983, ’87. ’89, ’91) - Richard had a front row seat and active role in an unrivaled run of gridiron greatness. It was this affiliation that led to Richard introducing his journalist son to the unglamorous side of athletics and to that end, it started a career that poured the foundation to a long and prosperous career getting paid watching men play a kid’s games. (Thanks, Dad!) Upon Richard’s overall retirement in 2006 – the Miami Dolphins presented him with a game ball commemorating his role in making the Dolphins one of the NFL’s jewel franchises. That football was proudly displayed in his Houschton, GA basement man cave – where he spent his retirement years feasting on TV sports. Richard’s plan stipulated that his soul be committed back to the Earth and along with the wishes of his wife, both Mabel and Richard will be freed to the wind – someplace where the ocean breezes calm the soul and the seafood is abundant and tasty. WHAT DOES COVID-19 LOOK LIKE? It doesn’t look like the White Disk with the Red Tulips sprouting off its surface as depicted on the slick television graphics. It doesn’t look like the cute masks with the vampire fangs or the sporty team logos printed on them. It doesn’t look like anything you want to see in a hundred lifetimes. It looks like this… An 86-year old man in a hospital bed in a negative pressure room - he worked over 40 years to earn a lucrative retirement in a nice home where he could enjoy his grandchildren. It looks like this… An 86-year old man who two weeks ago looked forward to moving into a new home, attached to IV lines, pulse/oxygen probes and heart monitors. It looks like this… An 86-year old man, unconscious, struggling to breath in enough oxygen to live another heartbeat – heartbeats ravaged by lungs filled with COVID-19 oxygen-depriving gunk. It’s ugly, it’s horrible and it sucks that over 280,000 Americans have suffered the same wheezing, gasping fate. And yet, it’s a hoax. It’s going to magically disappear, we test too much and our personal freedoms are being challenged by stay-at-home orders, mask requirements and contact tracing. For all of those who subscribe to the ignorant, uniformed rhetoric of naysayers – I offer this: Take a member of your family and watch them struggle to breathe. Watch the chest barely rise with each violent inhalation and the wheeze out what little oxygen that comes back. Take note of the pained expression each of these chores elicits. Do that and then try to justify your disbelief in the validity of this pandemic and the severity of its human impact. Today – 8 December, 2020: Richard Darrell Lee became the latest of over 283,747 United States COVID-19 casualties. He was 86. He was my father and he’s never coming back. That’s what COVID-19 looks like up close and I hope no one has to do that again, but that’s an impossible wish. Heed the warnings, take the precautions, this stuff is real. It has no smell, it has no flavor. It doesn’t care if you’re Left, Right, Centrist, Anglo, Black, Hispanic, Gay or Straight. It strikes without warning and without prejudice. Even if you don’t ignore it, it will make you sick and it may kill you or someone you do care for. Stay safe, stay vigilant Ken Lee 8 December 2020 Houchston, GA

RICHARD DARRELL LEE (14 June 1934 - 8 December 2020) He passed away this morning at 7:25 am ET in a hospital in Atlanta, GA following a two-week bout with COVID-19. The Portland, OR native was predeceased by his wife of over 60 years, Mable... View Obituary & Service Information

The family of Richard Darrell Lee created this Life Tributes page to make it easy to share your memories.