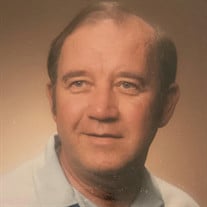 Ronald Calhoun, age 84, resident of Winder, GA passed away Sunday, January 23, 2022 at Northeast Georgia Medical Center Braselton. Ron is preceded in death by his mother, Juanita Berkshire, step father, Earl Berkshire, and sister, Marge Purins. Ron is survived by his wife of 63 years, Janet Calhoun; his daughters, Rhonda Bush (Earl), Becki Payiatsos (Mario), Stephanie Lunsford (Tim); and son, Gary Calhoun, as well as 8 grandchildren and 5 great grandchildren. Ron was born on April 18, 1937 in Lafayette, IN to Juanita Berkshire. He graduated from Jefferson High School in Lafayette, IN where he met his future bride. Ron worked for Standard Grocery Store form the early age of 15. He started as a bag boy and worked his way up to manager. During his career as store manager, he managed 4 stores before moving on to National Homes Acceptance Corp. where he was in the mortgage department. In 1972 he was transferred to Stone Mountain, GA where he and his family resided for 24 years. He and his wife Jan moved to Winder, GA and lived there until his death. Ron never met a stranger. He made friends wherever he went. He always had a joke or funny story to tell. Ron always had a smile on his face. In Winder, he was involved with the YMCA where he spent a lot of time and made many great friends. He loved history, trains and airplanes, and could tell you just about anything in regard to all. He also had a natural ability to draw with great skill. Ron attended Peachcrest Christian Church for many years and served in many capacities. He was also a member of the Walnut Grove Lodge 703 from 1983 until the time of his death. Ron was a family man. He adored his wife and children. Where you saw him, you would always see Jan or vice versa. He impacted many people’s lives and will be greatly missed. Visitation will be held Saturday, January 29, 2022 at Flanigan Funeral Home, 4400 South Lee St, Buford, GA from 2:00 p.m. until 4:00 p.m. A Celebration of Life will be held following visitation at 4:00 p.m.

The family of Ronald Calhoun created this Life Tributes page to make it easy to share your memories.