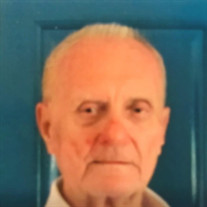 Rudolph Eugene Hagen, age 88, passed away peacefully on November 9, 2020 in a Personal Care Home in Lawrenceville, GA, where he had resided for the past two+ years battling dementia. Rudolph was born in Waseca, MN, on April 12, 1932 to Rueben (Jack) Eugene Hagen and Barbro Marguerita Ramseth. After graduating from high school in the Atlanta, GA area, Rudolph married his high school sweetheart, Barbara Joan Smallwood on May 21, 1952, who he was married to for over 34 years until her passing on June 15, 1986. Throughout their marriage they had six unique children, including Carolyn Denise Hagen Caruso, Rudolph Eugene Hagen, Jr; Cynthia Diane Hagen Patterson, Christopher Michael Hagen, Charise Dawn Hagen Dearing, and Lisa Joy Hagen Rezmer. These six children have since provided Rudolph eleven grandchildren and seven great-grandchildren! Shortly after getting married, Rudolph joined the United States Air Force, where he loyally served his country for over 23 years. Rudolph’s primary specialty in the Air Force was associated with computer programming when computers were initially in their infancy through the time when they could be used to perform many critical operations, including putting men and women in space and getting them back to Earth again. Rudolph’s Air Force travels took him around the world including an Air Force base near Landstuhl, Germany initially, and then to such amazing and exotic places like Colorado Springs, CO; Fort Walton Beach, FL; Tachikawa, Japan; Kansas City, MO; and Seoul, Korea. After a distinguished career in the Air Force, he continued to work many more years in civil service in the Fort Walton Beach area continuing his work in computer programming. Rudolph retired after working to serve his country for around 40 years. Shortly after his retirement began, Rudolph fulfilled one of his life-long dreams associated with living in the country when he moved to Paxton, FL. Years later he purchased almost 200 acres near Brundidge, AL where he spent most of his waking hours “walking and clearing his land”. In May, 2016, Rudolph had to leave his land to receive special care associated with his battle with dementia. In July, 2018, he moved to Lawrenceville, GA where he lived in a Personal Care Home until he passed away peacefully on the night of November 9, 2020! This is not the end of the story for Rudolph because during his life he gave his heart and life to Jesus! During his years in retirement he faithfully served as a member or deacon in the churches that he attended in Fort Walton (Ocean City Baptist), Paxton (Paxton Baptist Church), and in Brundidge (Salem Baptist Church). And now, as his earthly life has ended, his eternal life is beginning as he lives forever with Jesus!

Rudolph Eugene Hagen, age 88, passed away peacefully on November 9, 2020 in a Personal Care Home in Lawrenceville, GA, where he had resided for the past two+ years battling dementia. Rudolph was born in Waseca, MN, on April 12, 1932 to Rueben... View Obituary & Service Information

The family of Rudolph Eugene Hagen created this Life Tributes page to make it easy to share your memories.