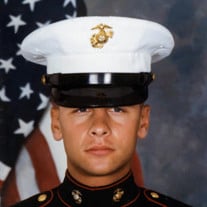 Corporal Russell Todd Wages, age 55, of Tucker, passed from this life on Thursday, December 3, 2020. He was preceded in death by his father, Dr. Tom L. Wages; “Mom,” Rev. Peggy Wages; and sister, Dr. Tonya Wages Jeffcoat. He is survived by his mother, Faye Wages; brother, Thomas Wages; brother and sister-in-law, Michael (Dave) and Emily Warlick; nephew, Jon Patrick Jeffcoat; nieces, Madison and Camille Warlick; as well as many precious and life-long friends. Todd grew up in the Buford area and graduated from Buford High School in 1983. He proudly served in the United States Marine Corps from 1986 to 1992, and is a veteran of Desert Storm. He studied Surveying and Mapping Sciences at the Southern Polytechnic College of Engineering and Engineering Technology at Kennesaw State University, and was employed as a land surveyor for over 20 years. He was an expert navigator, and could find his way through the woods with his quad sheet and compass, no GPS needed. He was a very talented drummer, and loved music in all forms and genres. Todd was an independent spirit with a strong heart for others. He had a fascination with space and the universe beyond, and will be remembered with love and fond memories by his dear friends and family. Interment will be at a later date with full military honors at the Georgia National Cemetery in Canton, Georgia. All arrangements will be handled by Flanigan Funeral Home and Crematory, Buford, www.flaniganfuneralhome.com. Rest easy, dear Todd, and be at peace.

The family of Russell Todd Wages created this Life Tributes page to make it easy to share your memories.

Corporal Russell Todd Wages, age 55, of Tucker, passed from this...