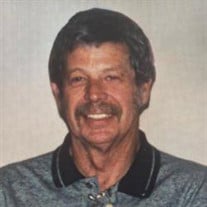 Sammie Childree, 80, passed away on April 25, 2022, at Emory Mid Town in Atlanta with family by his side. Sam was born February 4, 1942, in Montezuma, Georgia, to Benjamin Franklin Childree and Lois Marie Childree. Sam was an avid reader and loved fishing and camping and would be at any creek, lake, or ocean he could find hoping to catch the big one. In 1960, Sam graduated from Gilmer High School in Ellijay, Georgia, and joined the United States Air Force at Eglin Air Force Base in Florida, until being honorably discharged on October 2, 1967. After serving in the military, Sam moved to Atlanta and was employed by Bell South as a installer/repairman and later moved into a management position. After 30+ years he retired in 2000. On October 22, 1967, Sam married Josephine Higgins. Later moving to Buford, Georgia, where they spent many hours on the lake. Sam is pre-deceased by his parents, his sister Margie Ann Smith, brothers-in-law, Charles Morris, Charles C. Smith, and uncle, Lee Eldridge DeFoe. Sam is survived by his wife Josephine Childree, Virginia Fay Shedd (sister) of Bremen, Georgia, Willa Diane Redmond (sister) of Port St. Joe, Florida, Barbara Morris (sister-in-law) of Birmingham, Alabama, and his children Sonya Marie Childree of Mobile, Alabama, Steven Christopher Childree of Buford, Georgia, Connie Lynn Sonnenberg of Belt, Montana, Jessica Koterba of Hobson, Montana, and many grandchildren, nieces and nephews. Sam will be remembered for his willingness to help others whenever possible, his calm and gentle spirit, and his love for animals. A Memorial Service will be held at 1:00 PM Saturday, May 14, 2022 in the Flanigan Funeral Home Chapel with Dr. Lamar Holley officiating. The family will receive friends at the funeral home from 12:00 p.m. until 1:00 p.m. prior to the service. In lieu of flowers, donations may be made to The American Heart Association (heart.org) in memory of Sammie Childree.

Sammie Childree, 80, passed away on April 25, 2022, at Emory Mid Town in Atlanta with family by his side. Sam was born February 4, 1942, in Montezuma, Georgia, to Benjamin Franklin Childree and Lois Marie Childree. Sam was an avid reader and... View Obituary & Service Information

The family of Sammie Childree created this Life Tributes page to make it easy to share your memories.