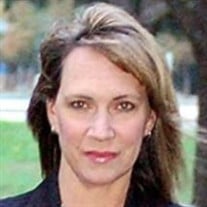 Shelby Harris Swatek-Long (September 22, 1963-August 2, 2021) Beautiful and Brave. A warm heart and generous loving nature endeared Shelby to her devoted husband, Michael R. Long, her loving and beloved parents, Phil and Margaret, her sister, Randall, brothers, Phillip and his wife, Mardi, John and his wife, Cathy, other family members, many friends, and yes, her dogs. Born in Washington D.C., her father’s career as The Bureau Chief and Washington Correspondent for The Cincinnati Enquirer, and later a peripatetic career with the Federal Aviation Administration gave her the opportunity to live and travel throughout the United States and Europe. She was born in Washington D.C., but her early years were in Honolulu. Atlanta was the next move, and she then moved with her parents to Brussels, Belgium. There she celebrated her 16th birthday and enrolled in the International School of Brussels. She enjoyed acting in ISB’s theater productions and graduated in 1981 with high honors and rewards in advanced courses of History, English, and French. After school hours she volunteered as a worker in impoverished sections of Brussels, helping senior citizens with cleaning and cooking chores and was honored for her dedication. Shelby travelled extensively on school trips and with her family over most of the countries of Europe. She learned to snow ski ad became proficient at it. She also became fluent in the French language, and later in Italian. After graduating from ISB she went to Bryn Mawr College in Pennsylvania, spent one year at The University of Colorado, but graduated from Bryn Mawr in 1985. After graduating, she lived in Italy for five years, then went back to the U.S. and lived in New York. But lured by her love of acting and intrigued by the stunt people she saw in action she struck out for Los Angeles, driving across the country in her old car with only Tucker, her black lab, for a companion. In Los Angeles she met Michael R. Long, her future husband. Mike was a well-known stunt coordinator and stunt man in the movie and TV worlds. She became his assistant and began learning about the stunt business from the inside. She quickly became proficient, and doubled Geena Rowland, Miro Sorvino, Muriel Hemingway, and others. Although she did not learn to drive until she was 27 years old stunt driving in movies became her passion. She wrote in a profile published in Bryn Mawr’s Alumnae Bulletin “Recently I lived my dream when I got to do stunt driving on the film “Drive Angry” driving a Bronco in pursuit of Nicolas Cage.” After pursuing the movie industry in various states, Shelby and Michael settled in the Atlanta, Georgia area and established the L.A. Stunts, LLC. Which became LAStunts Training Center. The school attracted aspiring stunt men and women locally as well as students from as distant places as South Africa. For 12 years they have trained people as young as 15, and as old as 50, at what is described as a Stunt Boot Camp. These were held as often as every month. Participants were taught to do high falls, engage in fist fights, tumbling, and mini tramps, fly like Peter Pan and shoot rifles and pistols, preparing them to successfully double actors in movie and T.V. productions. Shelby’s real passion, after stunt driving, was her dogs. She never saw a dog she did not love and want to shelter, especially if it was a stray or rescue dog. Shelby is survived by her husband, Michael R. Long, Sugar Hill, GA. her parents, Phillip M. and Margaret Harris Swatek, Melbourne, FL.a sister, Randall Harris Swatek and her partner, Rick Spero, East Hampton, New York, Brothers Phillip Swatek, Jr. and wife, Mardi, 0f Makawao, Maui, Hawaii, John Harris Swatek and wife, Cathy, Melbourne, FL ; also by nephews; nieces, cousins and “calabash” cousins Frances Crabtree and Agnes Crabtree Lane of Oklahoma. Shelby will be buried in the John R. Harris plot of Fairlawn Cemetery in Oklahoma City beside her grandparents, John Randall Harris, and Alice Graves Harris. A memorial service to be announced at a later date, will be held at The L.A. Stunt Boot Camp, in Buford, GA. To express condolences, please sign our online guest book at www.flaniganfuneralhome.com. Arrangements By: Junior E. Flanigan of Flanigan Funeral Home and Crematory, Buford, GA (770) 932-1133.

The family of Shelby Harris Swatek-Long created this Life Tributes page to make it easy to share your memories.