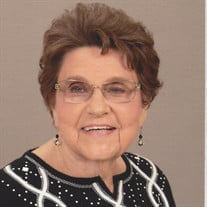 Shirley ‘Meme’ Ann Malone Cobb was a caring wife, mother, grandmother, and friend. Shirley left this world peacefully and surrounded by her family on September 16, 2021, at age 84. Shirley was born to Ina and Bob Malone in Brooks, Georgia on April 24, 1937. She was a true girly girl at heart and grew up loving dolls, dresses, and animals. Shirley was always mature for her age, and people close to her say she was born with an old soul. In 1955 Shirley married her sweetheart, Bobby Lee Cobb. As a young married couple, Shirley and Bobby called a few different cities home – from Montgomery to Baton Rouge, to Birmingham they eventually settled in Doraville Georgia. Together they went on to have 3 beautiful children: Connie, Rob, and Randy. As a young woman, Shirley worked as a legal secretary to help support her family while Bobby worked and went to night law school. Soon after, Shirley settled in as homemaker and took on the momentous job of raising her three children and lots and lots of pets. Shirley was a founding member and president of the Doraville Jaycettes, a leadership training and civic organization that became a huge passion of hers. As her children grew up the Cobb house became a classic bustling family home. Most Friday afternoons, Shirley would be found in the high school cafeteria preparing homemade spaghetti dinners for the football teams. Weekends were for family and sports: cheerleading/majorettes, football, baseball, swimming – she was team mom and there for it all. Sundays were all about family, whether they were road tripping to Griffin to see relatives or making big southern style dinners at home, family always came first for Shirley. Shirley spent her later years going by ‘Meme’ and doting on her family, especially her grandchildren. There wasn’t a flower she couldn’t grow in her garden, or a crossword she couldn’t solve, and her outfits always matched to a T. Shirley loved spending time making delicious southern meals that brought everyone together, watching wheel of fortune, dancing with the stars and most of all shopping! Like a recently found poem of hers notes “The bird is up hopping, it’s a good day to go shopping!”. She couldn’t stand being cold, swimming and water in general, sweating, and most of all people who didn’t like to chat. Once her own grandchildren were grown, her love for children did not end there. Shirley often cared for many other families and friends’ children as well. Her home was full of love, sweet cakes, and laughter, and she was always right at the center. Recently widowed, Shirley became a member of Buford First United Methodist Church and rekindled her faith within the loving community she found there. She also made some great new friends at the George Pierce Park community center through her workout classes. Both groups helped keep her spirits high as Shirley started a new chapter of her life. Shirley was preceded in death by her husband Bobby Lee Cobb, her brother Douglas Sanson and her parents Ina and Bob Malone. Shirley is survived by her children Connie (Don) Belling, Rob (Kelly) Cobb and Randy (Lynne) Cobb and her grandchildren Jason Belling, Ryan (Kat) Belling, Alex (Kristen) Cobb, Adam Cobb, Lindsey Cobb, Rachel Cobb, and Sarah Cobb. Funeral services will be held for family and friends on Monday, September 20th. Join us for a viewing at 12:00 p.m. and service at 1:00 p.m. in the Chapel of Flanigan Funeral Home (4400 South Lee Street) with Pastor Jim Buckman officiating. Interment will follow and will be open to immediate family only. You are welcome to send flowers, or you can donate to the following charities that were close to Shirley’s heart: The Atlanta Humane Society and The Wounded Warrior Project.

Shirley &#8216;Meme&#8217; Ann Malone Cobb was a caring wife, mother, grandmother, and friend. Shirley left this world peacefully and surrounded by her family on September 16, 2021, at age 84. Shirley was born to Ina and Bob Malone in Brooks,... View Obituary & Service Information

The family of Shirley Ann Malone Cobb created this Life Tributes page to make it easy to share your memories.