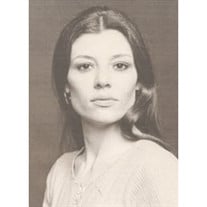 Shirley Berry Lowry passed away peacefully, surrounded by loved ones, on January 6, 2017. Shirley was born on September 5, 1946, in Columbus, Georgia. She was one of eight children of Charles and Frances (Miss Virginia 1913) Berry. Her mother was a dance instructor with her own dance studio-- and she made sure her four daughters learned to dance. Shirley excelled at dancing and thus she left Columbus in 1962 and ventured to New York City to become a professional dancer-- sharing the stage with the likes of Robert Goulet, Julie Andrews, Gene Kelly, and Richard Burton. Those who danced with her agreed with her proud and undeniable boast that "she kicked the highest." Shirley returned to Georgia (this time, metro Atlanta) to marry and become a mother to her beloved son, Michael Lowry. She also became an entrepreneur within her favorite business-- show business, owning a talent and celebrity look-a-like agency. Always drawn to live music, it was to Shirley's delight that her son taught himself how to play guitar when he was barely a teenager. Throughout the rest of her life she was blessed to be able to see and hear her son on the stage hundreds of times. Shirley became Meemaw to her grandson David in 2012. She lived her last years in close proximity to her son grandson, as well as two of her sisters (Frances and Marie Berry) with whom she loved combing through thrift stores for treasures (of which she amassed quite a collection!). She was quite a storyteller as well-- and loved to embellish her tales with unexpected details. She is survived by all seven of her siblings, sisters Marie Berry, Frances Berry (Bill Dance), and Betty Joines (Ward), and brothers John, Don, Frank and Glenn Berry. She is further survived by her son and grandson, Mike (Leslie) and David Lowry, niece Carson (Walter) Dance, nephews William (Ashlee) and Paul Dance, great-nieces Juniper and Cora, and her two dogs, Sailor and Betsy. A service will be held Thursday, January 19, 2017, 2pm, at the Cathedral of St. Philip, 2744 Peachtree Road N.W., in Atlanta, Georgia. To express condolences, please sign our online guest book at www.flaniganfuneralhome.com. Arrangements By: Junior E. Flanigan of Flanigan Funeral Home and Crematory, Buford, GA (770) 932-1133.

Shirley Berry Lowry passed away peacefully, surrounded by loved ones, on January 6, 2017. Shirley was born on September 5, 1946, in Columbus, Georgia. She was one of eight children of Charles and Frances (Miss Virginia 1913) Berry. Her mother... View Obituary & Service Information

The family of Shirley Lowry created this Life Tributes page to make it easy to share your memories.