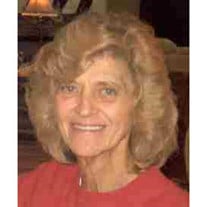 Shirley Ann Carpenter Newport, age 68, of Flowery Branch, GA, and formerly of the Solway Community of Knox County, Tennessee, passed away on February 9th, 2013, following a brief illness. She was preceded in death by her parents, Lloyd and Emma Carpenter and by her brother, Paul Carpenter, all of Solway Community, Knox County, TN. Ms Newport is survived by her daughter and son-in-law, Ann and Brad Brown of Buford, GA, her son, Scott Newport of McMinnville, TN; grandchildren, Adrianne (Brown) and Andrew Cantrell of Duluth, GA, Amy Brown and Ben Brown of Buford, GA and Emma Smith of McMinnville, TN; special loved one, Katelyn Hanson of Buford, GA; brothers and sisters-in-law, James and Joan Carpenter, David and Vickie Carpenter, all of Solway; sister, Rachel Carpenter of Clarksville, GA; as well as several nieces and nephews. She was born on November 10, 1944, in Oak Ridge, TN. She cared deeply for her children and always wanted the best for them. She was of the Baptist faith, having professed her Salvation and becoming a member of Solway Baptist Church as a young child. Ms. Newport was a tireless and devoted employee at several businesses throughout her life, and retired from Walmart Stores, Buford, GA after 10 years of service. She enjoyed sewing, gardening, and special building projects around her home. She was raised around her father's auto parts business, and took great pride in her knowledge of automobiles. Memorial service will be held on Tuesday, February 12, 2013 at 7:00 p.m. in the Chapel of Flanigan Funeral Home with Rev. Farrell Presley officiating. The family will receive friends at the funeral home on Tuesday from 4:00 p.m. until 7:00 p.m. The family wishes to express their gratitude to all of Ms Newport's caregivers at the Budd Terrace Rehabilitation facility, Atlanta, GA; and to the staff of Peachtree Christian Hospice in Duluth, GA. In lieu of flowers, Ms. Newport requested that memorial donations be made to St. Jude Childrens' Research Hospital, Memphis, TN.

Shirley Ann Carpenter Newport, age 68, of Flowery Branch, GA, and formerly of the Solway Community of Knox County, Tennessee, passed away on February 9th, 2013, following a brief illness. She was preceded in death by her parents, Lloyd and Emma... View Obituary & Service Information

The family of Shirley Ann Carpenter Newport created this Life Tributes page to make it easy to share your memories.