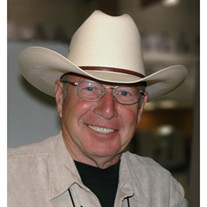 Stephen Carter Eigel made a peaceful transition to his new home in heaven on October 3, 2018. He fought a 20 year battle against "that nasty Mr. Parkinson" with courage, grace and dignity. He is almost certainly shooting his bow and arrows at targets with Jesus. Then without missing a beat, trying to figure out how they could squeeze in a round of golf and some fishing before lunch. Steve was born in DesMoines, Iowa in 1940 to Martha English Eigel and John Stanley Eigel (Marty and Jack) but spent most of his childhood in Crystal Lake, Illinois. He met his sweetheart, Suzanne Marie Martin at their alma mater, the University of Illinois in Champaign-Urbana, and tied the knot in Hoopeston in 1962. He was a Kappa Sigma at Illinois and served in the 33rd Division of the National Guard. A devoted 56-year marriage carried Steve and Suzanne from Chicago and Crystal Lake where they began raising their four boys, to Dunwoody, GA, to empty nesting in Clarksville, GA and Bonita Springs, FL. In 2016, they moved to Lanier Village Estates in Gainesville, GA. In 1973, when they moved the family to Dunwoody, Steve bought the Alphabet Shop from the company that transferred him to Atlanta and that launched an almost 30-year journey of employing hundreds of people at The Alphabet Group, Advertising Technologies and Bigelow & Eigel. He was greatly loved by many co-workers, clients and even rivals; he will be missed by all. Steve is survived by his wife Suzanne, their four boys: Keith (his wife Leigh and their children Alexandra, Peter, John Thomas, and Ansley), Chris (his wife Maureen and their children Jack and Madison), Tim (his wife Vicki and his boys Stephen (his wife Chelsey and their daughter Aspen) and Justin and Vicki's daughter Gracie), and Jim (his wife Megan and their daughters Grace, Emily, and Katherine); his brothers Chris (wife Carolyn) and Jay (wife Bonnie), his sister-in-law Karen Luetje (husband Bob); and a host of nieces, nephews, and their children. The family will host a memorial service and receive guests on October 13th at 2PM in the Lanier Village Estates Chapel: 4000 Village View Drive, Gainesville, GA 30506. The family requests that in lieu of flowers donations be made to the Micheal J. Fox Foundation or the Parkinson's Foundation.

Stephen Carter Eigel made a peaceful transition to his new home in heaven on October 3, 2018. He fought a 20 year battle against "that nasty Mr. Parkinson" with courage, grace and dignity. He is almost certainly shooting his bow and arrows at... View Obituary & Service Information

The family of Stephen Carter Eigel created this Life Tributes page to make it easy to share your memories.

Stephen Carter Eigel made a peaceful transition to his new home...