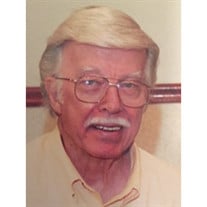 Stephen Morrison Sr. passed away during the early morning hours of August 13, 2016 after an illness that challenged his body, but not his spirit nor his personality. Steve was born in Monroe, Louisiana in 1928, but his hometown was Atlanta, Georgia. Steve was the son of Grace Cureton Morrison and Ike Morrison. He had one sister, Marjorie, "Margie" Sturm, who, along with Steve's parents, predeceased him. Steve grew up in Little Five Points and attended Highland School, Bass Junior High, Georgia Military Academy and Tech High. Steve was a veteran of World War II and the Korean War, serving in the Coast Guard and United States Navy, respectively. After he left the Coast Guard, Steve returned to Atlanta where he met and married the love of his life, Helen Bagley. In November of this year, Steve and Helen would have been married for 67 years. Also after the war, Steve attended Georgia State University (University of Georgia, Atlanta Division) where he was vice- president of the night school and president of Kappa Chapter, Delta Sigma Pi International Business Fraternity. Steve enjoyed a long and varied career. He worked in the oil business for American oil company and Amerada Hess. He also worked in sales and was a small business owner. Steve had many, many interests, but foremost he was a lifelong student of history, and he especially loved the study of the Civil War. His interest led him to membership in the Civil War Roundtable of Atlanta, for which he served as president. In addition, Steve loved genealogy and was a member of the Sons of the American Revolution and the John B Gordon Camp of the Sons of Confederate Veterans. Steve also served as past commander of the John B. Gordon Camp. Although Steve had numerous interests, his passion was his love of God and love of family. Steve was a Baptist and taught Sunday school for many years. He was devoted to his family. He is survived by his wife Helen Morrison of Doraville, Georgia, his son and daughter-in-law Stephen Jr. and Patricia Morrison of Marietta Georgia and their four children, Steve's grandchildren, Stephen III "Trey," Margaret, "Meg, " Molly, and Madeline "Maddie" Morrison. Steve is also survived by his brother-in-law Richard Sturm of Atlanta, his niece Cindy Smith and her family, his nephew Harry Hammond and his family, his brother-in-law and wife, Maron and Sarah Bagley of Buford, Georgia and his nieces, Theresa Watts and Lisa Hunter and their families. Steve is fondly remembered by his family and his many friends. Many of them have already greeted him warmly in the Father's house. Steve will be missed. Funeral services will be held on Tuesday, August 16, 2016 at 2:00 p.m. In the Chapel of Flanigan Funeral Home. Interment will follow at Sugar Hill Cemetery in Sugar Hill, GA. The family will receive friends at the funeral home on Monday, August 15, 2016, from 4:00 p.m. until 9:00 p.m.

Stephen Morrison Sr. passed away during the early morning hours of August 13, 2016 after an illness that challenged his body, but not his spirit nor his personality. Steve was born in Monroe, Louisiana in 1928, but his hometown was Atlanta,... View Obituary & Service Information

The family of Stephen Morrison, Sr. created this Life Tributes page to make it easy to share your memories.

Stephen Morrison Sr. passed away during the early morning hours...