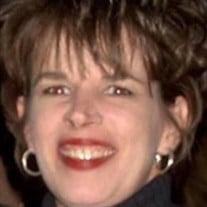 Susan Elizabeth Hinds (Brenner) June 9, 1962 – July 29, 2020 We lost our beloved Susan July 29, 2020 after a long battle with COPD. Susan was preceded in death by her father, Donald H Hinds, and mother, Claudia A Hinds. She leaves behind her husband of twenty years, Bruce Brenner, sister Cheryl Hinds Waltko (Jonathan), brother Stephen Hinds (Karen), stepson Seth Brenner, nieces Melissa McGee Henderson (Benjamín), Samantha Hinds, Nicole Brenner, Lindsey Johnson, Megan Vest, Kimberly Ezell, nephews Jason McGee (Tabitha), Ryan Hinds (Tania), Holden Brenner, Aaron Brenner, Jose Rivera, Tony Vest, Ethan Johnson, grandnieces Marlee Henderson, Charlotte Henderson, Lillyana McGee, grandnephew Jacob Henderson, Mother-In-Law Carol Luttenberg, brother-in-law Brian Brenner (Kathy), sister-in-law Christine Johnson (husband) and Lori Ezell, and her dearest friend Beth Zeigler of Baton Rouge. Susan was born in Lawrence, MA and resided in Methuen, MA through age 8 then Stone Mountain, GA from age 8 through 12 and spent the remainder of her youth and early adulthood in Baton Rouge, LA. She moved to Houston, TX in the mid-1980s where she eventually met her husband in the latter 1990s and married in 2000. Together they spent many years in the Houston, TX area before moving to Blount Springs, AL for a few years and finally to Buford, GA in 2018. Susan had a very interesting life; when still a teen, she was hired into Intertek USA as an intern and due to determination and grit, she rose quickly through corporate ranks to a senior management position where she remained the entirety of her professional career. She influenced the lives and careers of many with whom she worked and knew. Susan even owned a restaurant in Baton Rouge, LA at one point, which was always an inside family joke as she was not known for her cooking, beanie weenie casserole being her greatest culinary achievement. She was an avid LSU tiger fan who married into a family of Ohio State fans. During her time with Intertek, she developed a love of travel. There were few countries she did not visit at some point in her life. When he was young, her stepson, Seth, often wondered if she was a secret agent as she often disappeared to Trinidad, the Cayman Islands, and other tropical countries and islands for a few days at a time. She loved the sun, sand, and saltwater. Her first introduction to this lifelong attraction was in Biddeford Pool, ME. As a teenager and throughout the remainder of her life she enjoyed at least a yearly vacation to various spots along the Gulf of Mexico and several ocean cruises. She also loved snow skiing, roller coasters, bungee jumping and any other daring sport or activity that caught her eye. During the last few years of her life she was very limited in her activities; however, she found release in knitting and made sure her family enjoyed the warmth of her creations. She will be remembered for her devotion to her small breed dogs, whom she always loved like children, her freckles as numerous as the stars, her appreciation for a hot cup of coffee (or several), her sentimentality for family relics, a smile that was wider than expected from such a petite woman, and her easy, infectious giggle. To our wife, sister, aunt, friend – you will be missed and forever loved. Donations may be made to St. Jude's Children's Hospital in memory of Susan Elizabeth Hinds. A Celebration of Life Service will be held at a date to be determined.

The family of Susan Elizabeth Hinds created this Life Tributes page to make it easy to share your memories.