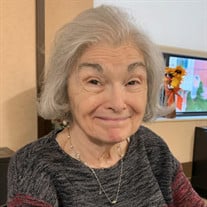 Sylvia Soskel Birbrower died on Friday, May 27th, 2021 in Buford, Georgia after long struggle with Multiple System Atrophy. She was 82 years old. Sylvia is survived by her four children, Amy, Doug and his wife Tena, Wendy and her husband Chris and Cliff, her nine Grandchildren, Gabriel, Jordan, Becky, Sydney, Owen, Sophie, Helena, Phoebe and Isaac, her brother Fred, brother in-law Barry, two sisters-in-law, Neda and Judy and nine nieces and nephews, all whom she loved dearly. Sylvia Soskel was born February 12th, 1939, in Peekskill, New York to her parents, Ben and Kay. She attended Peekskill High School where she met and later married her husband of 55 years, Stewart Mark Birbrower, who preceded her in death in 2014. After high school Sylvia earned a scholarship and attended nursing school. Sylvia and Stewart married in 1958, and moved to Yonkers, New York where they quickly expanded their family by welcoming their first three children in a four-year period. After outgrowing their apartment in Yonkers, in 1965, the couple decided to leave the city and head to Pound Ridge, NY. It was there that they would have their fourth child and spend the next 34 years raising their family. Once settled, and the children of school age, Sylvia put her nursing training to work at a local physician practice. As the resident neighborhood nurse, her nurturing manner and calm disposition gained her popularity with the children in the area -- her house was the first place they would stop for everything from a scraped knee to a broken arm. She was always willing to help calm a crying child and fix a wound. Over time Sylvia transitioned from nursing in a local practice to working at IBM’s internal medical department; spending time at several of the large IBM campuses throughout Westchester County. Eventually she would take on a Human Resource position and retire from that work in 1998. Stewart and Sylvia retired to Kiawah, South Carolina in 1999 and later moved to Ventura, California. While in South Carolina, Sylvia enjoyed working at a local art gallery selling paintings. She was an avid knitter, she loved to cook, read and always kept up to date on current medical research. Sylvia will be remembered for many aspects – She possessed effortless elegance, good taste and timeless beauty - in her younger years was frequently compared to Jackie Kennedy. Patient and compassionate, she would help you work through a complicated problem without hesitation. While her demeanor was reserved and quiet, Sylvia had internal strength that sometimes would go unnoticed; but those that knew her well, appreciated that it was there. She overcame difficult hardships like many of us; but remained resilient and always tried to encourage her children with positivity and optimism. Sylvia was a very warm and loving person who loved getting to know others. She made friendly easily and enjoyed learning and listening to everyone that she met. As a mother, she always put her children first. Supportive and encouraging, she always wanted the best for her family. It is this quality, this love that we will miss the most. Due to COVID-19, a memorial will be planned at a later date. In lieu of flowers, donations can be made in Sylvia’s honor to NAMI – National Alliance on Mental Illness: the nation’s largest grassroots mental health organization dedicated to building better lives for the millions of Americans affected by mental illness. Click here to donate.

Sylvia Soskel Birbrower died on Friday, May 27th, 2021 in Buford, Georgia after long struggle with Multiple System Atrophy. She was 82 years old. Sylvia is survived by her four children, Amy, Doug and his wife Tena, Wendy and her husband Chris... View Obituary & Service Information

The family of Sylvia Soskel Birbrower created this Life Tributes page to make it easy to share your memories.