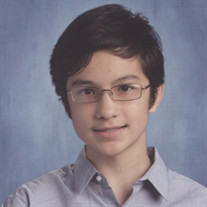 It is with heavy and broken hearts, we announce that Tai David Brown, born June 26, 2006, cherished and beloved son, brother, nephew, cousin & friend, passed away unexpectedly on Tuesday, July 14, 2020 at Ascension Sacred Heart Hospital in Port St. Joseph just outside of Panama City Beach, Florida. Tai would have been a rising freshman at Mill Creek High School this upcoming school year. He possessed a BEAUTIFUL soul. He enjoyed doing what most 14-year-old boys do; playing video games, hanging out with his friends, playing games with his family, watching anime (especially “Neon Genesis Evangelion”), drawing and playing the oboe. Tai was an accomplished artist and musician in his own right. He was a reading enthusiast, which aided him in being the academically brilliant young man that he was. Most importantly, Tai had a deep love for his family, and cherished the time they would spend together and enjoying family dinners together. Tai was wise beyond his years! Unlike most kids his age, he was not afraid to be himself. He touched so many people with his positive attitude and strived to lift the spirit of those around him as well as do whatever he could to put a smile on everyone’s face. He loved life and wanted everyone around him to live life to the fullest. His friends would say that “he was the best kind of friend anyone could ask for when they were feeling down.” He was a beacon of light to his friends and classmates. Tai will be missed everyday by his father, Benjamin Franklin Brown IV, his mother, Lou Ngo Brown, his loving brothers, Caiden, Parker & Finn. He will always be an adored grandson of Chau Van Ngo and Hanh My Pham & Carole Parker Brown. He will forever and always remain deeply loved by his aunts, uncles, cousins and many great friends and classmates. Visitation will be held on Monday, July 20, 2020 5:00pm – 8:00pm at Flanigan’s Funeral Home in Buford, GA. Tai’s memorial service for will be held at 11:00am on July 21, 2020 at Flanigan’s Funeral Home immediately followed by a burial dedication at Broadlawn Memorial Garden. The family is accepting flowers or you can make a donation in memory of Tai David Brown to Eagle Ranch. You can give online at their website (https://eagleranch.org/give/) or you can call the front office at (770) 967-8500. Live Streaming of Tuesday’s service will be available for those who cannot be there in person.

It is with heavy and broken hearts, we announce that Tai David...